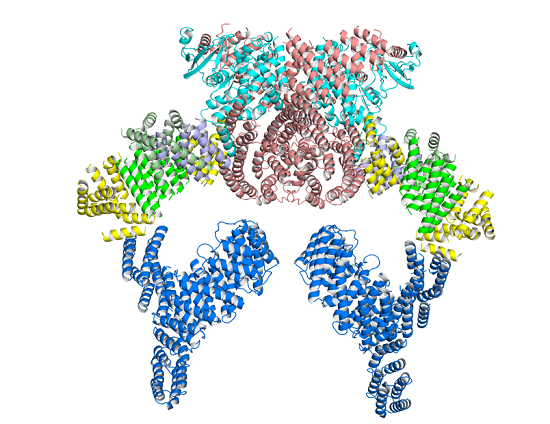 An advanced cryo-electron microscope allows AstraZeneca and Laboratory for Molecular Biology (LMB) scientists in Cambridge to uncover ground-breaking insights into a prime therapeutic target in cancer.

For years, biologists relied on x-ray crystallography to define the structure of proteins. But recent advancements in cryo-electron microscopy (cryo-EM) technology mean they can determine structural, three-dimensional protein models at tenths of a nanometer resolution – an advancement that is making waves in biotech.

Researchers at the LMB and AstraZeneca have now been able to apply this technology to define the world’s first protein structures for human ataxia telangiectasia mutated (ATM). ATM is a key trigger protein in the DNA damage response and a prime therapeutic target in cancer.

The researchers have access to the cutting-edge Cryo-EM technology thanks to the recent formation of a consortium involving the Medical Research Council’s (MRC) Laboratory for Molecular Biology (LMB), the University of Cambridge, and four pharmaceutical companies.

In the paper published in Science Advances, the scientists were able to use cryo-EM to define the structure of ATM in different functional states.

“Due to its large size – some 350 kDa, obtaining any high resolution structure has proved impossible for ATM with previous techniques. Cryo-EM allows us to image hundreds of thousands of single ATM molecules frozen in a single molecule thick layer of vitreous ice. From these images we then use algorithms to reconstruct the molecular structure of the protein in multiple conformations,” says Chris Phillips Associate Director of Structural Biology, IMED Biotech Unit at AstraZeneca. “Cryo-EM is transforming structural biology allowing us to study many target proteins for the first time and gain new mechanistic insights to help guide future drug design.”

From the exquisite detail shown on the images, the scientists were able to show that ATM acts as a molecular switch. In the on state the active site of the ATM dimer is open and able to bind substrate, while in the off state, ‘the closed dimer’, the active site is blocked.

Domagoj Baretić, a Post-Doctoral Scientist with the Laboratory of Molecular Biology and AstraZeneca, says, “The strength of the cryo-EM method was that it allowed us to see that there were both open and closed states of the ATM molecules co-existing in the same sample, which explains why we could see catalytic activity of ATM even under basal conditions. Activators and inhibitors may work by altering the equilibrium between the open and closed populations of ATM. With this work, we have provided a new framework for understanding the ATM biology”.

Roger Williams of the LMB says, “The collaboration with AstraZeneca has been an amazing experience. At every step of the process we learned from each other and shaped the approaches to our common goal. The project got a fast start because we were able to take advantage of the expertise and reagents that AstraZeneca had developed for ATM. Using the world-leading cryo-EM facilities in the LMB and our expertise with structural biology of related enzymes we swiftly revealed the structure of this key enzyme in the DNA damage response.”

“Having access to this technology through the combination of our MRC collaboration and our unique Pharma consortium really helps keep AstraZeneca at the leading edge in the industry. Cryo-EM still has some way to go before it becomes routine, but to be part of an organisation investing early, collaborating with the best external groups in the world, and positioning it for the first time within the drug discovery setting is really exciting.”, says Mike Snowden, VP and Head Discovery Sciences, IMED Biotech Unit, AstraZeneca.

Image: Structure of a human ATM dimer: A giant microscope allows Cambridge scientists to learn more about important protein structures in the body

AstraZeneca is a global, innovation-driven biopharmaceutical business that focuses on the discovery, development and commercialization of prescription medicines, primarily for the treatment of cardiovascular, metabolic, respiratory, inflammation, autoimmune, oncology, infection and neuroscience diseases. AstraZeneca operates in over 100 countries and its innovative medicines are used by millions of patients worldwide. For more information please visit: www.astrazeneca.com

AstraZeneca is a global, innovation-driven biopharmaceutical business that focuses on the discovery, development and commercialisation of prescription medicines, primarily for the treatment of cardiovascular, metabolic, respiratory, inflammation, autoimmune, oncology, infection and neuroscience diseases.