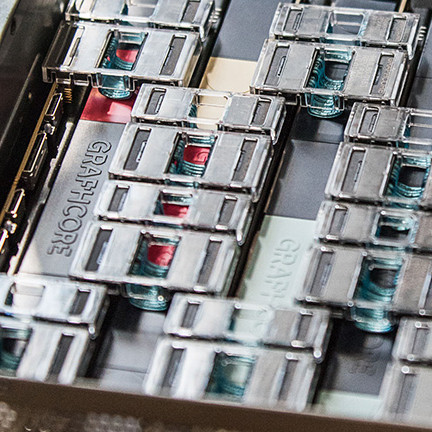 Graphcore, a world-leading AI chipmaker, has today announced a new $200 million funding round which values the company at $1.7 billion. BMW i Ventures and Microsoft have joined the round alongside new and existing investors.

This new funding brings the total capital raised by Graphcore to date to over $300M from the world’s leading venture capital, financial and strategic investors that also include Robert Bosch, Dell Technologies and Samsung Electronics.

Graphcore has built a completely new kind of processor and software for AI and machine intelligence. It has been shipping first products to early access customers and generated first revenues this year, just two years after the company was founded. High volume production is now ramping up to meet customer demand for its Intelligence Processor Unit (IPU) PCIe processor cards. Graphcore’s IPU is the first processor to be designed specifically for machine intelligence training and inference and delivers an increase in speed of 10x to 100x compared to today’s hardware.

The company is currently in a stage of rapid global growth, tripling the size of the team and opening new offices in London, Palo Alto and Beijing in 2018. This latest round of funding will allow Graphcore to execute on its product roadmap, accelerate scaling and expand the company’s global footprint. It is a further step towards fulfilling the company’s ambition to build a global technology company, focused on this new and fast-growing machine intelligence market.

Nigel Toon, CEO and co-founder of Graphcore, said: “Machine intelligence marks the start of a new age of computing which needs a radically different type of processor and software tools. This new, fast growing market creates the opportunity for Graphcore to build a major global technology company that can help innovators in AI achieve important breakthroughs.”

This Series D round was led by existing investor Atomico, one of Europe’s leading venture capital firms and by new investor, Sofina, a large European investment firm. Merian has also joined the round as a major new investor with Merian Chrysalis Investment Company and other funds managed by Merian Global Investors, in addition to BMW iVentures and Microsoft.

Graphcore has already attracted investments from many of the biggest names in machine intelligence including Demis Hassabis, co-founder of DeepMind, Zoubin Ghahramani of Cambridge University and Chief Scientist at Uber, Pieter Abbeel from UC Berkeley, and Greg Brockman, Scott Grey and Ilya Sutskever, from OpenAI.

Graphcore’s Intelligence Processing Unit (IPU) hardware and software lets innovators create next generation machine intelligence solutions. The IPU is the first processor to be designed specifically for Machine Intelligence and delivers between 10x to 100x speed up compared to today’s hardware. Graphcore has raised over $300m in funding from leading financial and strategic investors and is headquartered in Bristol UK, with offices in London UK, Oslo Norway, Palo Alto USA and Beijing China.

More information can be found at www.graphcore.ai