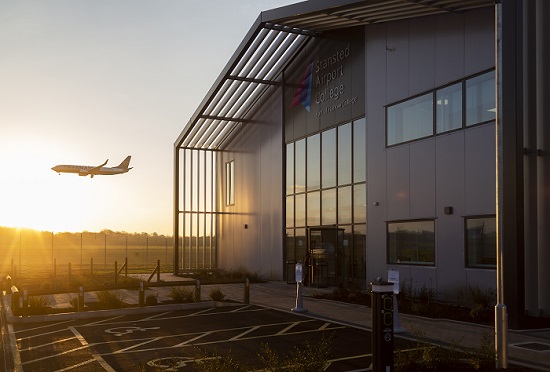 The College, which has opened its doors to almost 300 students for its first term, is a brand-new £11 million technical skills facility, the first purpose-built on-site college at a major UK airport and the only Further Education centre in Uttlesford.

Constructed on a one-acre site on land made available by the airport the project received two separate £3.5 million grants from the South East Local Enterprise Partnership (SELEP) Local Growth Fund and Essex County Council, £600,000 from Harlow College and was also supported by a £300,000 grant from Uttlesford District Council.

The College is the flagship of London Stansted’s commitment to supporting education, employment and training, alongside the Aerozone children’s education centre and dedicated on-site Stansted Employment and Skills Academy.

The opening was attended by South East Local Enterprise Partnership (SELEP) Adam Bryan, Cllr Kevin Bentley of Essex County Council and Uttlesford District Council leader Howard Rolfe. Students and staff of the college and local schoolchildren from nearby Birchanger Primary School were also at the event.

“This is a very special moment in my life as an MP. I’ve worked very hard with the Government and councils and the SELEP to get the money to help build [the college]. It really is going to transform the lives of thousands of people, it’s one-of-a-kind in the country and will help create good, skilled and well-paid jobs.

“In one year this beautiful place has been built. It is extraordinary, and I want to give special thanks to Manchester Airports Group because they are an extraordinary company and they genuinely care about the community. They invest in the community, they care about people and they do a lot of work in Harlow. They’re going to give jobs to thousands of people over the years because of this college."

“This is a very proud day for Essex because this Airport College is a completely home-grown project and originally came from a conversation between ECC, Stansted Airport and SELEP. As a result, and after a great deal of hard work by many people, we now have this excellent College under the superb leadership of Harlow College. It will provide so many opportunities for young people which in turn will help grow the local economy." Cllr Kevin Bentley, Deputy Leader, Essex County Council

“The College is a demonstration of the power of a true partnership between the private and public sector, local authority and LEP, airport and community. As a rapidly growing and responsible airport, employing over 12,000 people, we are focused on building a sustainable future for our business that is based on a long-term career pathway for young people across the region.

"The College is a model for development that we hope will provide the airport with the thousands of first-rate careers that we will need to support our growth over the next decade." Ken O’ Toole, CEO of London Stansted

“The opening of this new centre is a key moment in the important fight to tackle skills shortages in the SELEP area. Creating clear and direct paths for local young people into vitally important engineering roles, this employer-led project directly tackles challenges identified in our own Skills Strategy earlier this year.

"That strategy highlighted challenges, including having nearly 180,000 young people in our area with no qualifications, and skills below the national average at GCSE and degree level. Stansted Airport and Harlow College are to be congratulated on this centre which shows what can be achieved when employers, education providers, local authorities and the LEP work together. It is a great example of what we look for in Local Growth Fund supported projects." Christian Brodie, Chair of SELEP

“I am delighted that the Council has been an active partner in this ground-breaking project. The College is an excellent addition to the education offer in Uttlesford, one which completes the link between education and business. It is creating an environment where skills and training are crafted around what employers want, including many businesses at the Airport." Cllr Howard Rolfe, Uttlesford District Council

"We are incredibly proud to have opened our new College at London Stansted Airport. The College really demonstrates how Education and Industry can work together to provide meaningful opportunities for young people.

"The support we’ve had from employers has been second to none - they are helping shape the College, from the curriculum on offer, to offering work placements, providing professional talks and donating training resources. We can’t wait to see our first group of trainees graduate and move into amazing careers in aviation." Karen Spencer, Principal of Harlow College