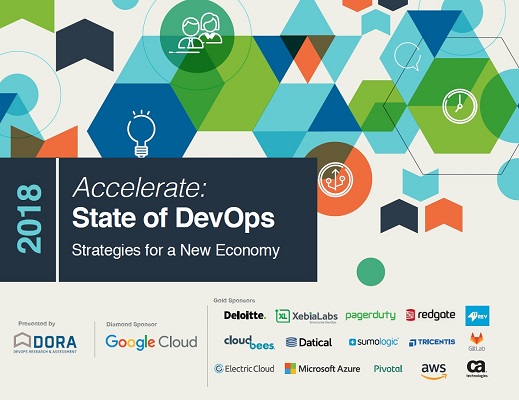 The 2018 Accelerate: State of DevOps Report, just published, includes database development as a key technical practice which can drive high performance in DevOps. This matches similar findings in research from Redgate Software, which sponsored the report and provided input.

Interestingly, a new theme in this year’s report was to identify the technical practices that drive higher performance and unlock competitive advantage. They include monitoring and observability, continuous testing, ‘shifting left’ on security and, importantly, database change management.

In terms of DevOps itself, the report shows that the highest performing organizations which adopt DevOps release changes 46 times more frequently, have a change failure rate that is 7 times lower, and are able to recover from breaking changes 2,604 times faster.

Crucially, the lead time from committing changes to being able to deploy them is less than one hour in the highest performing organizations – and between one and six months in low performers. Between 46% and 60% of changes deployed by low performers also require some form of hotfix, rollback, or patch.

Database development has entered the picture because deploying changes to the database is often the bottleneck in software development and slows down releases. To address this, the report investigated which database-related practices help when implementing continuous delivery to improve software delivery performance and availability.

The results revealed that teams which do continuous delivery well use version control for database changes and manage them in the same way as changes to the application. It also showed that integrating database development into software delivery positively contributes to performance, with changes to the database no longer slowing processes down or causing problems during deployments.

The starting block is communication, cross-team collaboration and visibility, which echoes Redgate’s own 2018 State of Database DevOps Survey earlier in the year. This showed that 76% of developers are now responsible for both application and database development, and 58% reported their development teams and DBAs work on projects together.

As Stephanie Herr, Database DevOps Product Manager at Redgate, comments, “DevOps has become widely accepted in application development and it’s increasingly being recognized that database development can’t be left behind. Tools are now available that integrate with and plug into the same version control, continuous integration and release management tools used for applications. More importantly, the business case for adopting DevOps for the database has now also been demonstrated.”

The 2018 Accelerate: State of DevOps Report can be downloaded online from DORA at https://cloudplatformonline.com/2018-state-of-devops.html