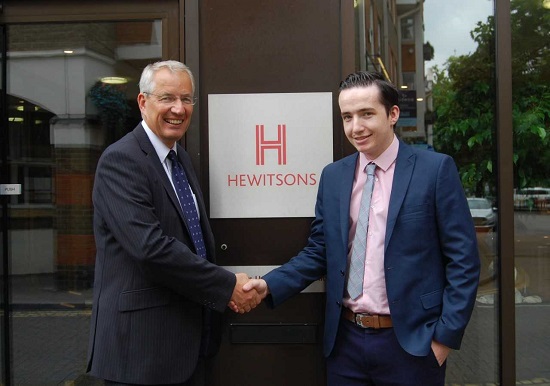 As a university student, Russell Wignall spent his summers working for a grain storage company to fund his time studying law.

While carrying out scientific tests on incoming crops, he had a separate ambition to embark on a career in the legal profession, helping clients to win important cases.

Now, the 23-year-old’s ambition is on the way to becoming a reality, after he landed himself a trainee position within the Cambridge office of respected law firm Hewitsons.

After graduating from Nottingham Trent University, Russell joined Hewitsons as an Administration Assistant for the firm’s renowned Residential Property team.

Initially, he was made responsible for general administrative support, including drawing up client quotes, client liaison and file opening.

However, recognising his ability and drive, colleagues soon entrusted him with additional roles, including organising deeds and assisting with research.

As a result of his hard work, determination and competence, Russell has now been promoted to the position of Trainee Legal Executive, working within the Residential Property team.

In his new role, Russell will now look after sales and purchases, with supervision, seeing these files from start to finish.

Russell, who is originally from Huntingdon, said: “My summer job was tough at times, often involving working long hours, but really it was the thought of one day becoming a solicitor that motivated me.

“I am very excited by this opportunity and am looking forward to stepping up in an ever-expanding team. I hope to build upon the skills I have developed in the role of Administration Assistant, whilst making a positive impact on the Residential Property team.

“I would like to thank all those who have helped me reach this stage, and I will relish the new challenges to come.”

Tim Middleton, Partner and Head of the Residential Property team at Hewitsons, said: “Russell joined the team as a novice to RP work, but it very quickly became clear that he was bright, hardworking and ambitious.

“It has therefore been rewarding to see him make the most of his role as our Administration Assistant, and the progression his appointment to Trainee Legal Executive represents.

“I would wish him luck but I have no doubt he will make a success of this new challenge, and we are delighted to have him with us.”

Further information
For more details about the firm please contact the Hewitsons press office on 01353 669939 or email Alison White or Will Ackermann at firstname.lastname@myriadpr.com