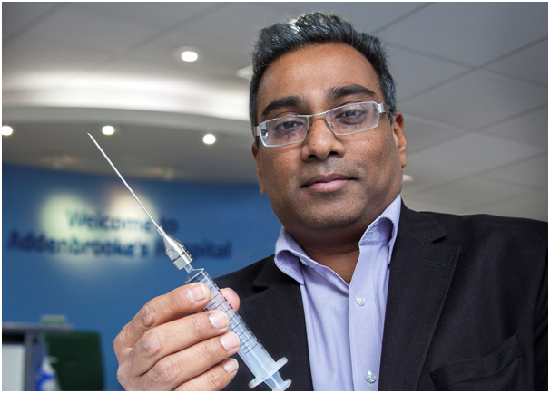 An invention by a Cambridge University Hospitals’ (CUH) consultant that has the potential to help prostate cancer patients and save the NHS millions of pounds is a step closer to becoming a reality.

CUH Urologist, Vincent Gnanapragasam, says a prototype of a product called Camprobe will be further developed over the next 15 to 18 months with the help of external engineers.

Mr Gnanapragasam, who created the prototype with Addenbrooke’s Clinical Engineering Department so biopsies can be taken more safely, will refine the final design with UK based engineers in preparation for clinical trials.

He and colleagues will simultaneously work with the Cambridge Cancer Trials Unit at Addenbrooke’s Hospital to develop the trial protocol and create an instructional video for staff responsible for testing patients for suspected prostate cancer.

The flurry of activity is another important step towards achieving CE marking, which indicates a product’s compliance with EU regulations and paves the way for Camprobe to be used at home and abroad.

At just over 11cms long, the modest appearance of the metal prototype belies its potential to be mass produced and made from plastic, meaning it could be a disposable item for clinicians. Ultimately it may look quite different from the current design, but work in an identical way.

The work has been made possible thanks to a product development award of nearly £800,000 from the National Institute for Health Research (NHIR), which was announced in June. Others collaborating with Mr Gnanapragasam include Health Enterprise East (HEE), which is an NHS innovation hub, and the North–West Anglia NHS Foundation Trust. It followed vital support from Addenbrooke’s Charitable Trust for an initial concept study.

Camprobe won acclaim because it allows biopsies to be performed through the much more sterile transperineal route under local anaesthetic, meaning there is less chance of infection than the current method. That involves a needle biopsy of the prostate guided by a transrectal ultrasound probe inserted through the rectum.

Mr Gnanapragasam, who is also a university lecturer with the University of Cambridge, said: “The coming months will see us working very closely with our collaborators and represents a major milestone in the development of the Camprobe.

“One of the key challenges going forwards is in making clinicians aware that there will be a much safer way of doing biopsies, which removes the risks of prostate biopsy related infections, some of which could be multi-antibiotic resistant. This is much better for patients and has the potential to save millions when looked at on a global or national scale.”

Dr James Clulow, Innovation Manager at HEE said: “We have been involved in the development of Camprobe from an early stage, and are delighted to have helped secure this significant NIHR i4i grant. It is another great example of frontline staff within the NHS coming up with technical solutions to problems they encounter working at the coalface of our healthcare system.”

Image: Vincent Gnanapragasam pictured with the Camprobe attached to a syringe.