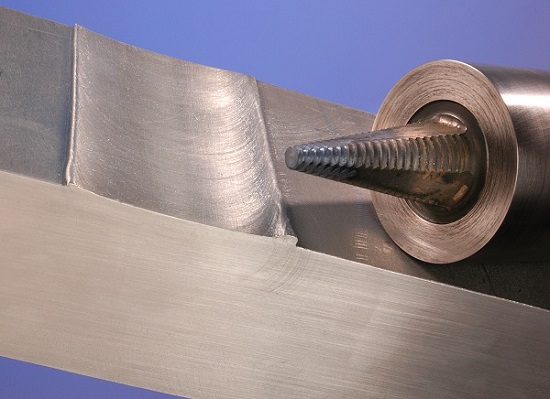 TWI is a world-renowned expert in materials and joining innovation, whose independent status has allowed innovations to be shared among a disparate selection of industries and businesses around the globe. One example of this is how Friction Stir Welding (FSW) has been picked up and used by business for a wide range of applications.

Invented in 1991 by Wayne Thomas, FSW is a welding method whereby a (typically) cylindrical shouldered tool with a profiled pin is rotated and inserted between pieces of material to be joined. The welding tool generates frictional heat, causing the materials to soften without melting, and mixes the materials together creating a solid phase bond between them. Friction stir welding has advantages for processing speed, weld strength, integrity, safety, energy efficiency and cost, while also allowing for the joining of materials that may otherwise be difficult to weld.

Particularly suited to automated operation, FSW is an adaptable technique that can be applied to a wide range of situations, including robotic application. With so many advantages, it is no surprise that FSW has been chosen as a solution for hundreds of organisations in a variety of industries around the world.

While TWI has strong connections with some 800 Member companies, the independence of TWI offers a real strength in working with global industry, allowing for partnerships and unbiased solutions and innovation across all aspects of manufacturing, fabrication and whole-life integrity management. As such, TWI has been able to see the benefits of FSW spread to sectors including aerospace, automotive, rail, construction, computing and more.

Here are a few examples of where FSW has been used by business and industry around the world:

Trains – The rail industry was an early adopter of FSW, with Japanese manufacturers Hitachi, KHI and Nippon Sharyo, among others, using the technique for both commuter and express trains for use around the world. The process has been used for Hitachi super-fast trains (Shinkasen) which are able to reach speeds of 320kph and on the new Virgin Azuma trains being assembled at Newton Aycliffe. Friction stir welded trains are also in operation on the UK Channel Tunnel rail link and on the London Underground.

Aerospace – Aerospace has also seen a strong uptake of FSW, which allows parts to be joined without the use of riveting to create lighter components and structures for aircraft. Used by companies including Boeing, Lockheed Martin, BAE systems, and EADS, the technique was also used by Eclipse Aerospace who developed the first friction stir welded jet aircraft, the Eclipse 500 and is used in Embraer’s latest ‘Legacy’ aircraft.

Motor Vehicles – The ability to join lightweight components with FSW has obvious advantages for the motor industry. Used by companies including Audi, Ford and Mazda, FSW has also been used by Tesla for their ground-breaking all-electric sports car. However, FSW has also seen links with more traditional car manufacture, as seen through the application of friction stir welding by Morgan Motors.

London Stadium – Following the success of the London Olympics in 2012 there was a need to convert the seating at the Olympic Stadium (now ‘London Stadium’) to allow a transition from ‘Athletics Mode’ to ‘Football Mode’ ahead of the 2015 Rugby World Cup and before the new tenants, West Ham United, moved in. With time being a factor, FSW was used (alongside TWI’s expertise) to deliver a quota of 3,500 panels for the new extruded aluminium seating decks well ahead of schedule.

Nuclear Waste – FSW is considered so reliable a process that it will be used to encapsulate Swedish and Finnish nuclear waste in giant copper containers designed to last for 100,000 years.

Apple iMac – Apple Inc. endorsed the friction stir welding technique at the launch presentation and in the promotional literature for their 2012 Apple iMac. With a 40% slimmer product, Apple used FSW to join the front and back of the case components since conventional welding techniques would not work with the new design.

You can get more information concerning Friction Stir Welding patents and licences by contacting ipr@twi.co.uk.