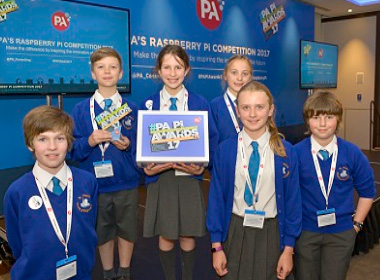 PA Consulting Group has launched its sixth annual Raspberry Pi challenge to inspire the innovators of the future. This year PA is asking pupils from schools and colleges to invent something that will help save the planet using a Raspberry Pi – a credit-card-size yet highly capable computer.

The aim of this year’s competition is to produce innovations under the new theme of sustainability. The main threats to the planet centre around energy use, food production and scarcer resources.

This year, school teams will be offered assistance via a forum on the Raspberry Pi Foundation website where a team of experts will be on hand to answer students’ questions.

The competition is open to the following categories:

The winning team in each category will receive £1,000 prize money. The first 100 teams to enter will receive a free Pi 3 starter kit.

Some winners from previous years have used their prize money to invest in new innovations and gone on to achieve commercial success. The winning entry from Truro and Penwith College, for example, used their prize money to found a project, IndePIdance, aimed at medical rehabilitation. IndePIdance aims to develop a muscle monitoring system combined with a robotic exoskeleton controlled by a Raspberry Pi. This will enable users to move freely and can potentially allow the previously immobile to become mobile. The team’s winning competition entry was an eye-tracking system to control a computer, also aimed at helping people with mobility issues.

Anita Chandraker, who leads the digital service team at PA Consulting Group and is the sponsor for the competition, says: “This initiative has driven great innovations in the past. We’ve been hugely impressed with what previous finalists came up with and the passion and commitment they show.

“Our Raspberry Pi competition is a core part of our ongoing work to make a difference to young people. The competition gives teams of students as young as eight the opportunity to gain hands-on experience of computer programming and engineering – valuable skills which have been declining in the UK in recent years.”

Anita goes on to say: “More and more schools are taking a significant interest in coding following its introduction on the school curriculum. It is more important than ever for young people to understand the basics of programming and the power technology can have in transforming the world.”

Some of the winning innovations from previous years include an air quality and weather surveillance station, a drumming selfie-machine, a robot that helps with household recycling, an automatic pill dispenser, a forest fire detector and a system that allows drivers to locate empty car park spaces in cities and towns.

PA first launched the competition in 2012 in response to a fall in programming skills and as a mechanism to tackle the growing talent gap in programming and coding. The Raspberry Pi was selected as it is a low-cost computer, launched with the intention of promoting the teaching of basic computer science in schools and stimulating interest in the IT industry.

For more information or to view a video of last year’s competition click here.