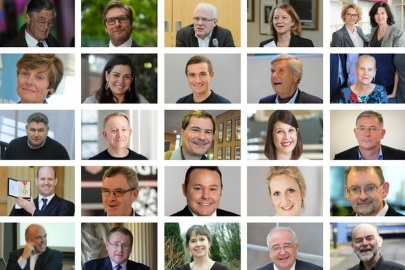 Cambridge Network's CEO, Claire Ruskin (top row, second from right), was among the leading figures from the Cambridge business community who were honoured at the News' 2017 Most Influential People event.

A drinks reception took place at St Catharine's College on Thursday evening where the list of names was announced. Guests heard from Ceri Gould, editor-in-chief for the South East and Cambridge area at News publisher Trinity Mirror, while the keynote speech was delivered by Billy Boyle, CEO of Owlstone Medical.

Boyle spoke about his company's award-winning work on a ground-breaking disease breathalyser that can detect conditions such as cancer, and could save 100,000 lives. He said: "It's an honour to be in the same room as people who will create an exciting future for us all."

The event was sponsored by KPMG, Norwich Research Park and Barclays, and the top 25 cover sectors including technology, life sciences, education and politics.