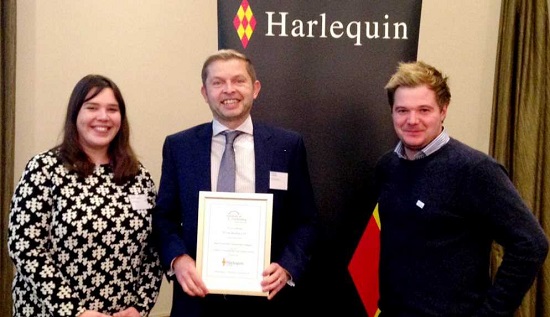 Price Bailey has been awarded the Best Corporate Partner accolade by the Institute of Fundraising East Anglia for its efforts to defeat dementia. Price Bailey was nominated for the prestigious award by the firm’s charity partner, Alzheimer's Research UK.

Since the partnership launched in April 2016, East Anglian-based Price Bailey has raised over £45,000 for the UK’s leading dementia research charity through a range of fundraising activities and events – with the most recent being a firm-wide annual Charity Fun Day in October, raising almost £10,000. The money is being used to fund pioneering research, helping Alzheimer's Research UK to achieve its mission of bringing about a life-changing treatment for dementia by 2025.

James King, CSR Partner at Price Bailey, was presented with the award – which recognises the best relationship between a charity and a corporate partner – on Monday 13 November, during the Institute of Fundraising’s East Anglia Regional Conference, at Bedford Lodge, in Newmarket.

James King said: “We chose Alzheimer’s Research UK as our charity because from the moment they first presented to us, we felt that working with them really mattered and that in our own way we could help make a difference. Over the last 18 months or so this has clearly been the case which has fed through to our teams and motivated them to raise more money for a great cause. The partnership has also been huge fun for everyone, all in the name of Alzheimer’s Research UK.

“Our team have also seen the serious side of the charity’s work by visiting the labs at the Alzheimer’s Research UK Cambridge Drug Discovery Institute at Addenbrooke’s hospital, where pioneering scientists are working tirelessly to try to beat dementia. Overall it has been a fabulous partnership and this award tops it off, especially after recently picking up the British Accountancy Award for Outstanding Community Engagement and Contribution. We are delighted to have been recognised and it highlights how successful our partnership with Alzheimer's Research UK has been.”

Jess Sayer, Community Fundraising Manager at Alzheimer's Research UK, said: “We’re thrilled that Price Bailey has been honoured with this award and recognised for their efforts to defeat dementia. We’ve been so impressed by the enthusiasm of the employees since the launch of our partnership. Whether it be baking a cake, volunteering at an event, shaving their head, jumping out of a plane or simply making a donation, it’s incredible to see the support we’ve received.

“This goes to show how vital our work is to people within the firm and highlights the strong desire there is at Price Bailey to put an end to the fear, harm and heartbreak caused by dementia. While we only have a few months left of our partnership, we know that everyone at Price Bailey will continue to amaze us. Congratulations on a thoroughly well-deserved award.”