Scooters head in the right direction for children’s charity 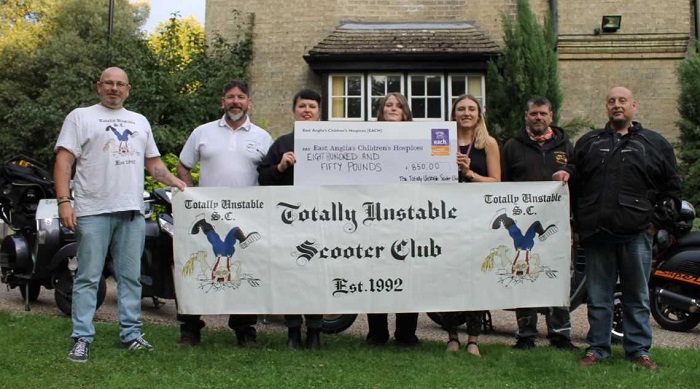 A group of scooter riders from Ely and surrounding villages has donated £850 to East Anglia’s Children’s Hospices (EACH).

Heidi Forsdick, TUSC member, said: “The majority of funds were raised through raffles, with prizes donated by club members, fellow scooterists and stallholders. A big thank you to everybody who contributed, including Monty’s Rolls, a vendor at our summer all-dayer that gave a very generous donation.”

TUSC was established in 1992. It currently has 26 members of various ages, who share an interest in scooters and music associated with the scooter scene. The group meets on the second Wednesday of every month at The Townhouse Pub in Ely.

It started fundraising for good causes five years ago and has so far raised nearly £4,000 in total.

Heidi said: “We had EACH as our chosen charity in 2014 and it wasn't until we had a tour of its Milton hospice that we fully appreciated the support EACH gives to children and their families. This is why the club wanted to support EACH again this year.”

EACH cares for children and young people with life-threatening conditions and supports their families. Its service currently benefits more than 200 people in Cambrigeshire and over 600 more across the rest of East Anglia.

Polly West, EACH Cambridgeshire Community Fundraiser, said: “We’d like to say a big thank you to TUSC for raising this £850, especially having supported us in the past.

“We need to raise more than £5 million from fundraising every year, so all offers of support from the community like this of TUSC are hugely appreciated.”

For more information about EACH visit www.each.org.uk. For more on TUSC, find the group on Faceboook.