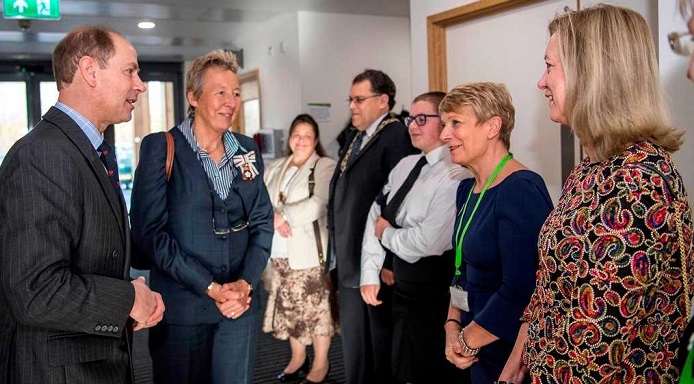 Arthur Rank Hospice’s home at Shelford Bottom was officially opened on Friday (19 January) by His Royal Highness, The Earl of Wessex, Prince Edward. The Earl enjoyed a tour of the Hospice – meeting patients, volunteers and staff – before unveiling an official plaque to mark the special occasion.

His Royal Highness’ visit to the Cambridgeshire hospice coincides with the start of His Royal Highness's Real Tennis Tour 2018, during which The Earl has pledged to raise funds for The Duke of Edinburgh's Award, by playing tennis on every real tennis court in the world.  His tour began in the City with a visit to the Cambridge University Real Tennis Club on Grange Road, followed by a dinner at Jesus College.

Among other guests gathered at the Hospice to meet The Earl were Duke of Edinburgh Award volunteers Alice Webb, Jodie Lawler and Morgan Larter who regularly volunteer at the Hospice’s charity shops as part of their service to the community. Jodie said: “It was really nice to meet him at the Hospice today. I’ve been volunteering in the Shelford charity shop, which has been a really good experience giving back to the community and I’ve learnt lots of new skills. I’m hoping to go onto my Silver and Gold Awards next. He was really nice and interested to hear what we’ve all been doing so far.”

The Earl paused to speak to invitees in the Hospice’s Bistro – including benefactors, trustees, patrons, civic dignitaries, staff and the team responsible for building the new hospice – after being taken on a guided tour of the facility which opened its doors to patients in November 2016. During the tour - guided by the Hospice’s CEO Dr Lynn Morgan and Director of Clinical Services Liz Webb - he took the opportunity to talk to Day Therapy patients. Peter Wooding who was attending day therapy for the first time, said: “It was nice of them to arrange a Royal Visit on my first day! He was a very nice man – I was amazed, we sat and talked for quite some time. I was having my hands massaged and he said, ‘That looks good’ and I said ‘It is’. No airs no graces, just an interesting chap.”

His Royal Highness then proceeded to the Inpatient Unit. Carly Love, Matron on the Hospice’s Inpatient Unit adds: “It was an honour for The Earl to visit the Unit and discover more about the positive changes that have been made possible by us moving to a custom-built building. He was particularly interested to talk to the patients and hear their stories: one told him that he was at Buckingham Palace on the day that he, Prince Edward was born, receiving an award from Prince Philip, Duke of Edinburgh!

“No two days are ever the same here, but his visit is definitely one which will go down in the Hospice’s history. It’s a real boost to know that another member of the Royal Family has seen first-hand and appreciated how important our work is on the ground in our county, as we work with individuals on such a personal level.”

CEO Dr Lynn Morgan comments: “We are delighted that The Earl of Wessex was able to take the time to visit us today and officially open our new home, continuing a legacy of Royal recognition which has continued since Arthur Rank Hospice first came into being. As well as unveiling a plaque marking this special occasion, The Earl was kind enough to sign the front page of our Founders’ Book, which also includes the names of all the people who donated to our Founders’ Appeal. The book will be available to view in the Bistro, so do feel free to call in to visit us, see this piece of history for yourself, and of course have a hot drink and something to eat whilst you’re here!”

The community was integral to the realisation of the new facility and continues to support Arthur Rank Hospice in striving to raise funds, not only towards the £10.5 million project, but additionally to help provide the £7.45 million needed each year in order to deliver care and services free of charge to patients and their loved ones.