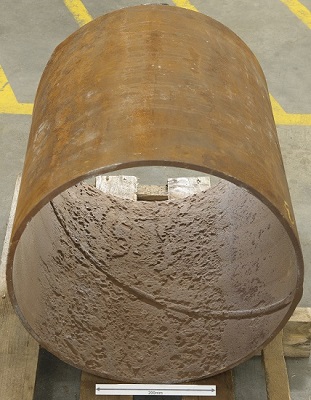 TWI’s decades of experience in materials joining and engineering processes for industry has seen innovation and problem-solving across all areas of manufacturing, fabrication and integrity management. Included in this body of work is TWI’s expertise in assessing and mitigating failures as a result of corrosion, such as with pipelines for the oil and gas industry.

One example of this saw TWI called by the Kuwait Oil Corporation to find the root cause of failure in a critical high-pressure wet sour service gas pipeline. The pipeline had suffered several leaks, including one due to a crack along a spiral weld, however repair uncovered severe internal corrosion which caused the pipeline to be decommissioned. TWI was called to undertake a failure investigation, but initial tests found that the pipe material had been correctly selected and the outside of the pipeline was in good condition, indicative of effective coating and cathodic protection.

However, the inside of the pipeline showed severe pitting in the bottom of the pipe alongside a spiral weld failure. Phased Array Ultrasonic Testing showed that the cracking originated internally and was longer on the inside than on the outside. This internal corrosion had been caused by the presence of water, CO2 and H2S gases, in addition it was found that a weld misalignment had resulted in roof-topping of the spiral weld, which increased the in-service stresses, while regular pipeline shutdowns added a small amount of cyclic loading. While none of these factors would have created the problems on their own, when combined they were enough to cause the cracking. TWI determined that increased localised stress at the spiral weld along with corrosion due to a severe sour service environment caused the cracking. As a result, the Kuwait Oil Corporation replaced their pipeline with a seamless sour service pipe rated to the correct level of H2S and water cut. You can find out more about this incident of failure along the spiral welds in this gas pipeline here.

This is not the only incident that TWI has investigated on behalf of the Kuwait Oil Company, as internal blistering on a 20” diameter cross-country pipeline created the need for a fitness-for-service assessment. In this instance, TWI was sent a 200mm long specimen of the longitudinally-welded damaged pipe along with an undamaged spirally welded section from the same pipeline. Both destructive and non-destructive tests were undertaken on the pipes in order to determine material property and identify the cause and extent of the damage. The results of these tests would allow the Kuwait Oil Company to undertake in-line inspections to assess the fitness-for-service of their pipeline as a whole. Tests included ultrasonic testing, magnetic particle inspection, tensile, hardness, and toughness tests, together with chemical analysis and metallography. Meanwhile, the operating history of the pipe revealed that laminations and blistering had created failure in 1976 and that the pipe had briefly been used to transport seawater for fire-fighting following the Gulf War of 1991.

An inspection report from 1981 was assessed, although it was unclear whether recommendations for repair had been actioned at that time, while in-line inspection found internal corrosion damage was almost entirely absent from the 7km of spiral welded pipe but was widespread in the long-seam welded pipe that comprised the rest of the pipeline. Test results showed that the long-seam pipe contained hydrogen induced cracking and blistering alongside internal corrosion, leading to the conclusion that the spiral welded pipe had been installed later. However, the long-seam pipe had failed due to the transport of a sour product, most likely before the 1976 failure, while the transport of seawater in 1991 had little effect, if any. Since the Kuwait Oil Company confirmed that the future operating pressure of the pipeline would be very low, TWI was able to recommend an alternative revalidation methodology for the pipeline, based on a hydrostatic proof test. This saved significantly on the cost of inspection and repair, while ensuring the continued safety and integrity of the pipeline. You can find out more about this pipeline fitness-for-service case here.

It is not just in the case of failure that TWI is called to assist, as demonstrated by a case involving Single Buoy Moorings (SBM) of Monaco. SBM had been tasked with designing and building an offshore floating production, storage and offloading (FPSO) vessel to be used off the coast of NW Australia. However, during the pipework welding, high hardness values were discovered in the weld zones for the duplex stainless steel rigid arm and riser piping. As these hardness values were outside the design requirements, the welds were sent to TWI for evaluation.

Simulated environment tests were done using slow strain rate (SSR) tensile testing and four-point bent beam tests at elevated temperature and pressure in a hot, sour brine solution. These tests showed that while there were high hardness values related to the strain induced by welding, these were unlikely to be a problem during service, meaning that the welds were passed as fit for purpose. You can find out more about this duplex stainless steel riser fitness-for-service work here.

Another case involving deepwater risers saw TWI carry out a series of detailed engineering critical assessments (ECA) on steel catenary risers ahead of installation in an oil and gas field. The risers were constructed from C-Mn steel with alloy 625 cladding in critical locations and there were a variety of pipe geometries due to different service requirements. TWI was asked to determine the maximum initial allowable flaw sizes that would ensure the integrity of the risers through installation and operation while also taking account of possible fatigue loading, sour service and internal corrosion during operation. The structural integrity of the risers is critical, considering the high pressure flammable fluids they can contain and the proximity to the platform which may be manned. They also need to be able to withstand a variety of loads, both static and cyclic, including internal pressure, self-weight, fatigue loading and loading from ocean currents, and to a range of environmental degradation mechanisms, including external and internal corrosion, and environmentally assisted cracking (particularly in the presence of sour fluids, i.e. those containing hydrogen sulphide).

TWI examined the structural integrity of the girth welds as they are subject to cyclic (fatigue) loading and cannot usually be inspected once installed. Careful examination of the quality of materials, welding and inspection, along with the ECA to look into the relationship between flaw size, materials and loading can ensure that flaws will not grow large enough to lead to failure of the riser during its design life. These calculations were carried out using BS 7910, backed up by validation data to assess the integrity of the project. You can find out more about this project to ensure the structural integrity of deepwater risers here.

TWI is holding a related Sour Corrosion Training Course – providing information on performance and testing materials in sour service. The course will provide an excellent introduction for engineers looking to develop their knowledge in this area.

Experts from TWI will also be at the world’s largest corrosion conference and exposition when we attend NACE International’s event in Phoenix, Arizona from 15-19 April, 2018.

You can find out more about TWI’s work with aggressive environment testing here, or, please contact us for more information.