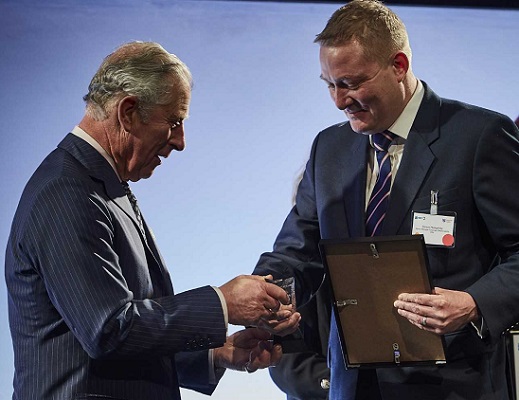 Simon has had responsibility for managing ARM's involvement with EDT and Industrial Cadets since he joined the company in 2013. He has expanded the number of programmes delivered, the organisation’s reach in schools and the involvement of ARM’s people mentoring and engaging with those students. Throughout this time, Simon has been responsible for encouraging the direct involvement of over 150 of ARM employees in EDT and IC programmes. In addition, through internal communication channels, he has raised awareness of these programmes to employees at a global level.

Simon also promotes change through a wide range of voluntary roles locally and nationally, including being a panel member at Engineering UK and a Board member at EDT.

In 2017 Simon designed and delivered ARM's first Industrial Cadet accredited work experience programme, a programme that will be rolled-out globally. He also oversaw formal mentor training, delivered by EDT to more than 20 ARM employees, now being supported to mentor on IC programmes for the first time, joining over 130 employees who have done so before them.

Dominic Vergine, Head of Sustainability and Corporate Responsibility at ARM Holdings says, “Simon's likeable personality, approachable nature and experience in education, in particular STEM, provide a perfect platform for him to inform and influence decision makers within ARM. Since joining ARM in 2013 he has created an impressive network and established personal relationships with over 30 schools, with organisations such as Engineering UK, EDT, Career Ready, Smallpeice, and UKESF, and with many of the UK's largest companies. His experience, ability to network and build trusted relationships demonstrates a credibility and level of awareness that stands him out as a leader in education that people listen to and take direction.”

Simon is, of course, delighted to be receive the award, saying “My role at ARM provided me the opportunity and insights to appreciate the impact that effective interventions into educational experiences that we as a business, and through my involvement, I, could have for young people. Knowing that a difference can be made and being able to leverage that by connecting with the Industrial Cadets accreditation process was something I saw as a brilliant opportunity. I consider that by ensuring a high-quality programme of activity, Industrial Cadets accreditation can be transformative.

“The potential to scale this is exciting. I strongly believe that a national, indeed, international standard to recognise young people’s achievements in STEM learning linked and aligned with curriculum learning objectives is vital. I want to be see that any young person irrespective of background, culture, geography or gender has an equal opportunity to access inspirational, programme based, experiences that leave them with a tangible certified currency that they can take forward into their next phase of learning.”

Industrial Cadets is a rapidly expanding accreditation for experiences of industry in science, technology, engineering and maths – the STE(A)M disciplines. The idea for the accreditation was originally seeded in a conversation about providing effective experiences of work and industry between HRH The Prince of Wales and executives of the Tata Group.

By July 2018, 14,000 young people will have ‘graduated’ from Industrial Cadet accredited programmes and an ambitious expansion plan targets 500,000 by July 2021, if the right partners and support can be established. The growth of Industrial Cadets has reflected the demand among employers for an accreditation that can assure them that resources invested in engaging young people are most effectively employed. Industrial Cadets encourages the young person to continue their learner journey of STE(A)M through a Bronze, Silver, Gold accreditation, a structure like the well-established Duke of Edinburgh Awards.

The headline sponsor for the event is the GFG Foundation, which was founded by the industrialist and entrepreneur Sanjeev Gupta and his wife Nicola, with the objective to develop the skills and potential in people to help them start or continue working in the engineering, metals and renewable energy sectors. The GFG Foundation is ‘independent but linked’ to the GFG Alliance, a $10Bn global conglomerate that includes the Liberty House Group, which is spearheading the Greensteel and Greenmetal initiative in the UK. Sanjeev Gupta is being announced as one of His Royal Highness’s Ambassadors for Industrial Cadets at the awards event.

The event is supported by the IET.

The Manufacturer magazine is Media Partner for the event.