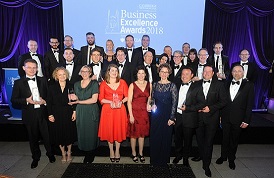 The Madingley Road firm has enjoyed a busy 12 months, growing its revenues and negotiating a long-mooted merger with French firm Schneider Electric’s software division, a move which has created a company worth £3bn.

Awards were handed out in ten categories at the event, which is sponsored by Barclays. Guest speaker was John Pienaar, BBC deputy political editor.

Simon Edgley, regional managing director for News publisher Trinity Mirror, said: “Congratulations to all the winners. This year saw a bumper crop of entries, reflecting the increasing popularity and continued credibility of these awards and the ongoing success of our local businesses and business people.

“The awards celebrate these fantastic businesses and business people who make our region the place it is. We live in turbulent times, with the spectre of Brexit and the uncertainty it creates on the horizon, but what stands out now is the incredible resilience and can-do attitude of our local business community.”

The Biomed Realty award for business person of the year went to Darrin Disley, who presided over a stellar 12 months at gene editing powerhouse Horizon. Dr Disley departed the company last month, but leaves behind a firm which has become a leader in its field.

Genie Ventures secured the Pure award for employer of the year, and Millers Music received the Cambridge BID independent retailer of the year award.

The Hewitsons award for business innovation was given to Cydar, which has come up with a novel guidance system for surgeons that combines 2D and 3D images. The Allia award for social entrepreneurship went to Form the Future, the organisation that helps give students a flavour of the world of work.

Monoclonal antibodies pioneer Sir Gregory Winter enters the hall of fame by receiving the MedImmune award for outstanding contribution. A co-founder of Cambridge Antibody Technology, his work led to the discovery of blockbuster drug Humira. Now chairman of another up and coming firm, Bicycle Therapeutics, Sir Gregory is also Master of Trinity College, and in that role has been pivotal in the renewal of Cambridge Science Park, which is owned by the college.