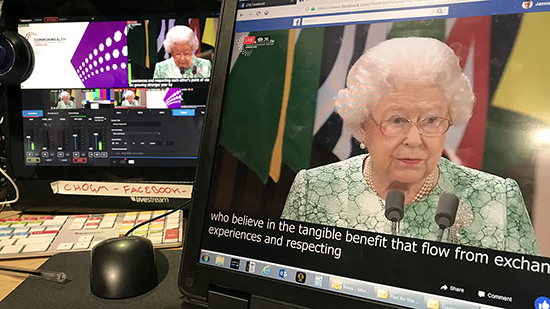 THe UK hosted the Commonwealth Heads of Government Meeting (CHOGM), where world leaders gathered in London and Windsor to address shared global challenges and agree actions on how to create a better future for all. WaveFX was on-site for seven days...

WaveFX was webcasting the events, forums and ceremonies live to Facebook, YouTube and LiveStream, working for Glasgow’s, a multi-award winning agency with specialities in events management and technical production.

The Commonwealth contains a diverse group of countries. It is home to half of the globe’s top emerging cities and, with a combined population of 2.4 billion people, nearly a third of the global population.

The Commonwealth Summit was formally opened by Queen Elizabeth followed by an official welcome of the leaders of 53 Commonwealth nations by UK Prime Minister Theresa May and Commonwealth Secretary-General Patricia Scotland.

A first for WaveFX was the new feature within Facebook to crosspost live webcasts.

Jamie from WaveFX said: “Crossposting is a great new feature, allowing us to broadcast across multiple pages without the need for multiple encoders. For example we streamed the official opening live to the Buckingham Palace Facebook page and crossposted simultaneously to the Commonwealth, with viewing figures at just over 580,000.”

Other highlights of the week included Meghan Markle joining Prince Harry as he begins work as a Commonwealth youth ambassador. Webcasting live from Buckingham Place as The Queen called the Commonwealth ‘one of the world’s great convening powers’ during her speech at the formal opening, and Emeli Sande singing the National Anthem.

WaveFX is a Cambridge based media agency which films and webcasts throughout the UK and abroad with a vast experience working for companies, charities and agencies. Its flexible, proactive team are more than happy to work on small scale projects as well as partner with other agencies for larger productions.

If WaveFX can help in anyway with your latest event, webcast or video production, please do get in touch with Jamie: 01223 505600 or email hello@wavefx.co.uk