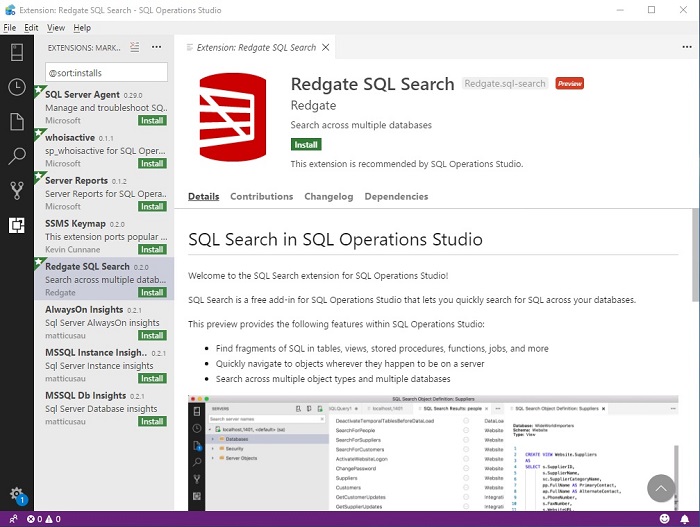 The latest Public Preview release of SQL Operations Studio, the first cross-platform database development tool from Microsoft, has been enhanced with an extension from Redgate Software. Already known as the leading Microsoft tools vendor, Redgate has further developed its hugely popular and free SQL Search tool to integrate with and plug into SQL Operations Studio.

Built on top of Visual Studio Code, SQL Operations Studio is a free lightweight tool for modern database development and operations that runs on Windows, macOS and Linux. It’s been designed for developers without a deep knowledge of database administration, so that they can manage databases and maintain them.

SQL Search is the most popular tool Redgate has ever developed and the version for SQL Server Management Studio and Visual Studio 2017 has been downloaded more than half a million times. It saves developers time and removes frustration by finding fragments of SQL in tables, views, stored procedures, functions, and jobs. Importantly, it also searches across multiple object types and databases, and allows users to quickly navigate to wherever the fragments happen to be on a server.

The new extension for SQL Operations Studio gives developers who prefer this cross-platform tool the same functionality on the Windows, macOS or Linux platform. It was developed by Foundry, the Research & Development division of Redgate, to discover the appeal of Redgate extensions for cross-platform use, and explore the challenges of creating tools in the space.

The launch is an important one because, as Redgate’s 2018 State of Database DevOps Survey shows, 76% of organizations have developers in their team who work across both applications and databases. Their greatest challenge is synchronizing the application and database changes, and overcoming different approaches to development within multi-function teams.

SQL Operations Studio addresses part of the challenge by allowing developers to stay with their favored platform as they move between application and database development. Microsoft also, however, wants to build what it calls a rich tools eco-system for SQL Operations Studio, and its fourth major update in March included an Extension Manager to make it simple to discover and acquire additional functionality.

The Preview release of the SQL Search extension for SQL Operations Studio is now available and is the first step on Redgate’s cross-platform journey. As Jonathan Roberts, the Foundry Team Lead explains: “Redgate has a complete portfolio of database development tools which plug into SQL Server Management Studio and Visual Studio 2017 and bring DevOps to databases. We want to find out what added functionality users of SQL Operations Studio want, and how we can help deliver it to them. SQL Search is a natural extension to begin with because it’s a relatively small tool and the task of adapting it for macOS and Linux gave us some valuable insights.”

The Foundry team is now actively seeking feedback from users to determine the next step on the cross-platform journey.