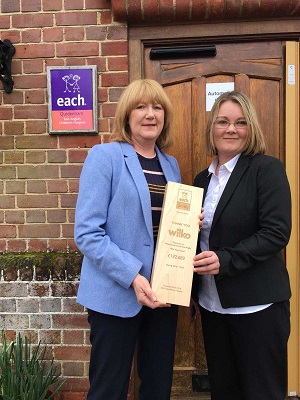 High Street chain wilko is celebrating having raised £132,683 in an incredible two years of fundraising across its East Anglia stores.

Money was raised through team members’ activities out of stores, from skydives and endurance runs to EACH’s own Santa Runs, and in stores, from cake sales and bucket collections to head shaves and book stalls, in addition to carrier bag fees.

The support from wilko in 2017 extended to supplying £500 worth of vouchers for EACH’s Christmas parties as well as wrapping paper, crackers and presents. There were also instances of stores supplying volunteers and refreshments for the charity’s fundraising events, such as when wilko in King’s Lynn provided registrars and bottles of water for EACH’s Colour Dash in the town.

Among the busiest of wilko’s stores were its branches in Ely, Ipswich and King’s Lynn.

EACH cares for children and young people with life-threatening conditions across the region, and supports their families. The good cause needs almost £6 million a year to provide its vital service.

Carol Plunkett, EACH’s Norfolk Fundraising Manager, said: “Wilko had ambitious targets at the start of its fundraising, but the enthusiasm of team members coupled with our support has produced exceptional results. We couldn’t be more grateful. The total amount raised is enough to pay for over a week of care and support across East Anglia.”

Nick Wilkinson, wilko’s Family Charity Ambassador, said: “Helping good causes and supporting great work in our community is at the heart of what we do at wilko. Our team members have loved supporting EACH over the last few years and it’s great to see how the funds that have been raised from our customers and team members have supported the charity.”

For more details about EACH and how to get involved with fundraising, go to www.each.org.uk.