Taking the quantum leap: what is quantum technology for business? 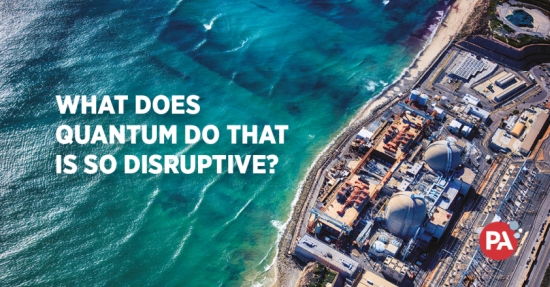 Businesses could be forgiven for pleading tech fatigue as they try to keep up with the fast-developing worlds of artificial intelligence, internet of things (IoT) and cyber. But there’s another breakthrough on the horizon that is demanding attention – quantum technology.

Quantum promises improvements to a huge range of technology, including:

Some of these applications, like quantum computing, are a long way off. But others could be reality within a year or two. The use of these quantum technologies could simply be an evolution, or it could be truly disruptive.

The word “quantum” will probably summon up images of Stephen Hawking and Albert Einstein. And yes, it is about sub-atomic physics. But you don’t need to grapple too much with the actual science, in the same way that you don’t need to grapple with how a semiconductor works to understand the potential of a smartphone. It’s enough to know that it’s about harnessing what is happening inside atoms.

Technology based on quantum physics has been in our lives for 50 years, whether it’s nuclear power or those semiconductors in our computers and phones. The difference now is that scientists can understand and control the inner workings of atoms more closely. And they can do it in ways that have commercial applications.

The two biggest areas they are working on are (here comes the science) entanglement and superposition.

This is the principle that two atoms can still be connected, or entangled, after they have been separated. And if you change one of them, you affect the properties of both.

One possibility this opens up is a new kind of encryption key for more secure communications. A little like the seal on a jam jar, the key would clearly reveal if data is interfered with after sending.

This is the idea that particles or objects can be in two states at once. Scientists have long understood that electrons can exist as particles and waves, but now they can slow the movement of atoms almost to “absolute zero”.

These “cold atoms” are highly sensitive to motion and magnetic fields. And that, in turn, opens the way to much more accurate sensors and navigation systems.

The UK government has invested about £400m in its quantum initiative, with a large proportion going to four university “hubs”. It also recently launched an inquiry into the opportunities of quantum technology. The aim is to make the UK a leader in the field through research and quickly creating practical applications for new discoveries.

The businesses with the keenest eye for the opportunity will look to team up with these universities to commercialise their research. To do that, they need to assess what quantum technology means for them and their sector, and understand its applications to build an investment case.