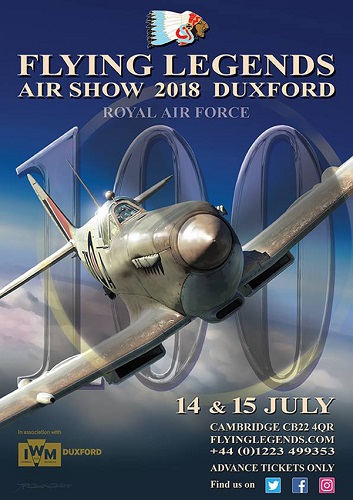 New for 2018, the Flying Legends Air Show offers two vintage villages with a wide range of nostalgic entertainment, including the Umbrella Big Band performing swinging big band classics, and for the first time at the Flying Legends Air Show, the Hotsie Totsies performing songs from the 1920s to the 1940s in their inimitable harmonic style.   ‘Laurel and Hardy’ return for scene-stealing performances with their Model T Ford car.  There is also the opportunity to sit in a replica Spitfire and have a vintage makeover*.

Visitors can meet living history groups representing:  the Royal Flying Corps of the First World War, an airfield construction team of the Second World War and No.303 Polish Squadron of the Royal Air Force, the most successful Fighter Command unit during the Battle of Britain.

The Home Front Bus offers a unique living history experience contained within a classic double-decker bus, featuring detailed reconstructions of a 1940s living room, shop, bombed out street and air raid shelter.  As visitors explore the Home Front Bus they encounter the sounds, sights and smells of Britain on the Home Front.

An exclusive preview of extended footage from the finished film Spitfire will be screened at the air show in advance of its release into cinemas this summer. With breathtaking aerial footage from the world’s top aviation photographer John Dibbs and rare digitally-remastered archive footage from the 1940s, combined with an incredible soundscape and the words of the last surviving combat veterans, Spitfire is a striking and poignant film.

During the flying display visitors can see up to 50 historic aircraft presented at the airfield.  Highlights of the flying programme include 14 Supermarine Spitfires, from the rare Mark I to Mark XVI models; five Second World War American P-51 Mustang fighter aircraft; four Hawker Hurricanes, B-17 Flying Fortress Sally B, the only flying B-17 in Europe, and the world’s only airworthy Bristol Blenheim.

New for the Flying Legends Air Show this year, the grandstand experience offers an uninterrupted view of all the flying action. Visitors can also get up close to aircraft on the flightline walk on the mornings of the air show weekend.*

The Flying Legends Air Show is organised and produced by The Fighter Collection. For further information visit www.flyinglegends.com

Tickets for the Flying Legends Air Show must be booked in advance; no on-the-day tickets are available.