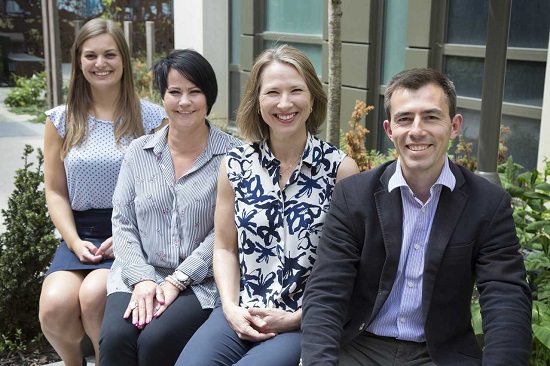 A specialist clinic set up by Cambridge University Hospitals to help children with a rare and painful joint condition has been applauded by one of the first families who use it.

Sibel Ozcan and her husband Neil Wilson, from Cambridge, says the Child and Young People’s East of England Rheumatology Service (CHEERS) at Addenbrooke’s Hospital brings vital relief to young sufferers of juvenile idiopathic arthritis – and raises awareness of the condition among parents and the wider medical profession.

Their four-year-old daughter, Ayla Ozcan Wilson, was diagnosed just over a year ago after a stressful period when they didn’t know what was wrong.

“Ayla was two and a half when she first fell ill with a swollen knee and it took over four months for her to be referred to the paediatric rheumatology department,” Sibel said.

“During that time she was in constant pain, needed to be carried everywhere and it had a material impact on her confidence and emotional well-being, as she was not able to run around like all her friends.

“That was difficult to watch as a parent, because we did not know how to help her.

That quickly changed at Ayla’s first appointment with the paediatric rheumatology department when Ayla received the diagnosis of juvenile idiopathic arthritis and they learned that many of her joints were affected.

Sibel said: “With treatment, the impact on Ayla’s life was immediate and dramatic even though it took her six months to go into remission. Within a few days she said ‘it doesn’t hurt anymore’ and now participates in all the activities she wants – including racing with her friends and even winning on occasions.

“The department have been brilliant – the specialist consultants, nurses and physiotherapy team – and we are extremely grateful for all they have done in getting Ayla back to being the active, happy little girl she used to be.”

Service lead, Dr Kate Armon, who also oversees a satellite clinic in Norwich for the convenience of patients in that part of the region, said juvenile idiopathic arthritis affects around 15,000 children in the UK.

It has a prevalence of one in 1,000 children and is broken into seven different groups of the condition, some of which are milder than others.

It cannot be cured, but drug combinations of painkillers, steroids, standard anti-rheumatic drugs and new biological therapies can help control the disease.  Provided the disease is caught early, children can go into remission and have good outcomes, staying in remission into adulthood and in some cases coming off all treatment.

Dr Armon said: “Ayla’s story is one we hear a lot. Because of the lack of awareness and challenges around the children communicating their symptoms, joint pain can often be attributed to other conditions.

“We would ideally like to see children in clinic within three months of the onset of symptoms. That gives us the best chance to get the children in remission without any long-term damage to the joints.

“Since last November, the network has received specialist services commissioning for the East of England from NHS England. All trusts in the region can refer children to the service and a number have additional formal agreements for the team to conduct outreach clinics locally, which also allows support and training for local professionals”.

Anyone who wants more information about the clinic, which further reinforces the Trusts reputation for pioneering new treatments, should visit https://www.cuh.nhs.uk/childrens-services/childrens-clinics-and-wards/childrens-services/paediatric-rheumatology Or telephone 01223 348577