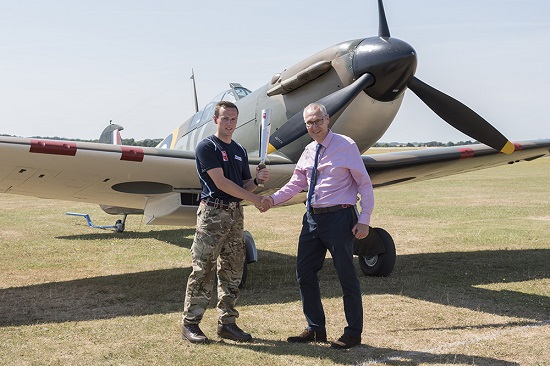 The RAF Baton relay team, with the specially-designed centenary baton, were welcomed to IWM Duxford by John Brown, Executive Director, Commercial Services and Operations for Imperial War Museums, on the historic airfield next to IWM Duxford’s rare Mark I Supermarine Spitfire.

John Brown said: “We were delighted to welcome the RAF Centenary Baton Relay team to IWM Duxford today.  Visitors were pleased to see the baton at Duxford, which opened under the auspices of the newly-formed Royal Air Force in 1918.  Today’s event is the start of IWM Duxford’s activities in partnership with the RAF centenary, culminating with the Duxford Battle of Britain Air Show on Saturday 22 and Sunday 23 September.”

The roar of Spitfires and Hurricanes over Duxford’s historic airfield make this a hugely engaging historic experience and a great British day out for 2018. The flying display will showcase not only the famous historic aircraft of the RAF but will also present its modern capabilities with contemporary aircraft in service today.

Find out more about the Duxford Battle of Britain Air Show