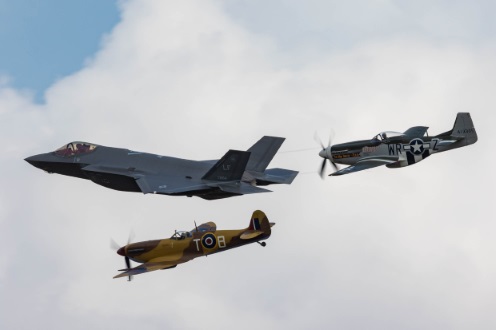 This weekend (Saturday 14 and Sunday 15 July) over 31,000 visitors from all over the world enjoyed a wonderfully nostalgic weekend at the Flying Legends Air Show.

The Flying Legends Air Show presented two vintage villages with a wide range of nostalgic entertainment, including the Umbrella Big Band performing swinging big band classics, and for the first time at the Flying Legends Air Show, the Hotsie Totsies performing songs from the 1920s to the 1940s in their inimitable harmonic style.   ‘Laurel and Hardy’ returned for scene-stealing performances with their Model T Ford car.  There was also the opportunity to sit in a replica Spitfire and have a vintage makeover.

Visitors met living history groups representing the Royal Flying Corps of the First World War, an airfield construction team of the Second World War and No.303 Polish Squadron of the Royal Air Force, the most successful Fighter Command unit during the Battle of Britain.  The Spirit of Britain portrayed pilots and ground crew of the Second Tactical Air Force during 1944, living in tented encampments with original period camping equipment used at the time.  Ops 39-45 presented authentic Bomber briefings, as would have been presented to RAF bomber crews during the Second World War.

The flying display included a stunning Spitfire scramble, flypast and tailchase; a tribute to the Battle of Britain movie, filmed at Duxford 50 years ago, which featured four Hispano Buchon aircraft and three Supermarine Spitfires; B-17 Flying Fortress Sally B accompanied by a P-47 Thunderbolt and followed by three P-51 Mustangs; the United States Air Force Heritage Flight featuring a contemporary F-35 Lighting jet accompanied by a P-51 Mustang and Supermarine Spitfire MkV; and the internationally famous balbo finale formation of up to 30 historic aircraft.

The next air show at IWM Duxford is the Battle of Britain Air Show on Saturday 22 and Sunday 23 September. Tickets can be purchased at https://www.iwm.org.uk/events/duxford-battle-of-britain-air-show-2018