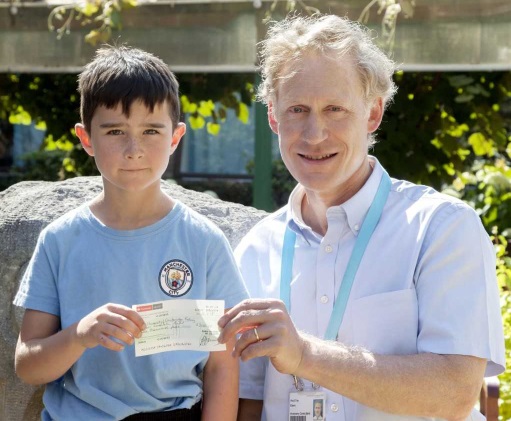 A plucky seven-year-old has scaled the highest peak in Ireland to raise money to help doctors at Addenbrooke’s Hospital research the cancer that took his father’s life.

Matt Houlihan was just two when his father, Iñaki, lost his battle with kidney cancer. Five years on, he set up a Gofundme page with his mum, Heidi, to climb Carrauntoohil in Co Kerry in Ireland in memory of his father.

Accompanied by Heidi and friends of Iñaki, Matt achieved the 11-kilometre ascent with remarkable ease reaching the 1038-metre peak in under six hours.

On Monday (23 July) he made an emotional return to Addenbrooke’s Hospital, part of Cambridge University Hospitals NHS Foundation Trust, to present the cheque for £3,000 to the doctor who treated his father at Addenbrooke’s, Professor Tim Eisen.

At that time the family lived in Yarwell, near Peterborough, where they still have friends and family, but they moved to West Cork in Ireland shortly after Iñaki’s death.

Tim, a professor of medical oncology, said: “The whole team is incredibly humbled by Matt’s amazing achievement at such a young age in memory of his dad and it was great to see them both.

“I remember Iñaki well. We were all so much hoping to have been able to do more for him but he had a very aggressive form of kidney cancer and it affected us all.

“Things have moved on quite a bit since then and research into the disease remains very active. Several new treatments have been developed in the last couple of years, mainly to do with activating the immune system against the cancer cells.

“Our research programme in Cambridge is focused on minimising the risk of kidney cancer returning after surgery and this money will help towards that.”

Heidi commented: “I am so very proud of Matt. The challenge was Matt’s own idea and seeing him climb Carrauntoohil in memory of his dad and then hand over the cheque to Professor Eisen have been very special moments.

“It has given Matt a huge sense of achievement to know that the money he has raised will help in some small way to fund research into treatment for kidney cancer. As a family we wish we could do so much more to support Professor Eisen’s research. Who knows – perhaps Matt will go on to do more fundraising in the future.”