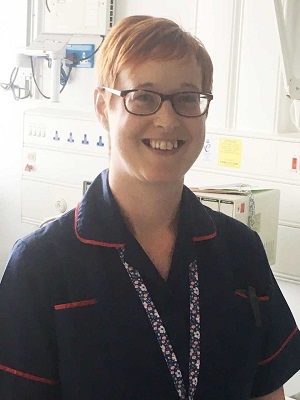 A specialist nurse, who was back at work just eight months after having a life-saving heart transplant, is urging people to consider becoming donors.

Louise, who has worked for the Trust for 18 years, said: “I will be 40 in November and rather than being devastated by this fact, I will be ever thankful to get there.

“It’s very hard to put into words the gratitude that I and my family feel towards the family who, in their darkest hour were able to think about somebody else. It quite simply saved my life.”

Louise, who highlights that one person could save up to eight lives, was born with a congenital heart abnormality and had a succession of hospital treatments as a child and adult in Cambridge and London as her heart gradually failed.

Symptoms included abdomen problems, dizziness, and pain, and pauses in the heart rate – with the most spectacular one being registered at 12 seconds.

When two attempts by Newcastle’s Freeman Hospital to fit a pacemaker failed she was put on the urgent list for a transplant – enduring two nerve wracking false alarms when hearts were deemed unsuitable.

But in March 2016 Louise’s luck changed and thanks to her donor, the donor’s family and a talented Newcastle surgeon called Asif Hasan, she had her operation in March 2016 and was back at work by the following October.

Louise, who is married with a 12-year-old daughter, said: “Waiting is a mixture of feeling like you want someone to tell you immediately there is a heart, and on the other hand not wanting to have that goodbye conversation with your family. My condition carried a 25 per cent chance of me not surviving the first 12 weeks – so the stakes were high!

“It has to be made clear that transplant will never be a cure, it can only ever be a treatment. However, I no longer live in fear that I may not even be here tomorrow.

“I am not naïve enough to expect to live to 80 – my body will always try to reject my heart – but I am hopeful I will see my daughter into adulthood. I am able to go on long-haul holidays if I wish, without the insurance being too astronomical. I went to New York in May and it was amazing!

“I have been able to increase my working hours, and this meant I was able to successfully apply for a job that I have wanted for a long time.

“My message to potential donors is: ‘Have the conversation with your family since if people don’t know your wishes, you may not become an organ donor even if you want to be one. You could save eight lives as a donor, eight lives.”

According to NHS Blood and Transplant three people every day die in need of an organ transplant. Becoming an organ donor only takes a few minutes if you register online.