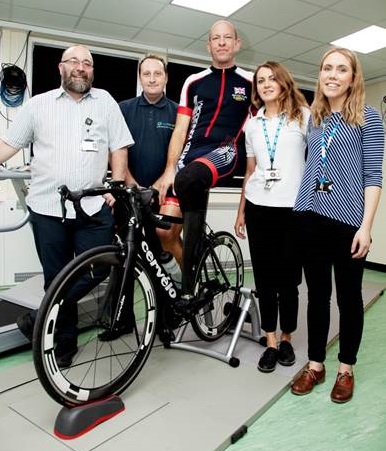 A soldier who lost his leg after being hit by an 11-ton tank will be going for gold at the Invictus Games after a team effort by clinicians and engineers to make an advanced new limb.

Cambridge University Hospital (CUH) NHS Foundation Trust, working in partnership with the Prosthetic and Orthotics provider Opcare, has designed a custom-made prosthetic for 48-year-old Wayne Harrold, whose leg was crushed by a Spartan-tracked reconnaissance vehicle during an exercise on Salisbury Plain in 2001.

Wayne, from Soham, Cambridgeshire, will wear the lightweight prosthetic in the cycling time trial at this month’s Invictus Games in Sydney (20 to 27 October), an international adaptive multi-sport event, founded by Prince Harry, so wounded, injured or sick armed services personnel and veterans can take part in sports.

Eilidh Hannah, a Prosthetist at CUH, enlisted the specialist expertise of the hospital’s Clinical Engineering Innovation team as she felt a more sophisticated, and risk assessed, prosthetic leg would help Wayne, who won silver last year, to go faster on his bike. The limb has been in part funded by the Veterans Prosthetics Funding Panel.

His limb is made out of carbon fibre laminate along with an aluminium custom-made component which, following various prototypes, was judged to be best for the patient whilst considering weight, durability, function and aesthetics.

A final review of Wayne using the limb took place last week in the Gait Lab at CUH and he flew to Australia with the team on Monday.

He was fitted with small reflective markers which were picked up by motion capture cameras in the clinic as he cycled at full speed. The trajectory of the markers were then analysed to make sure everything is right with the alignment of Wayne’s leg.

Despite his amputation, Wayne stayed in the army for another ten years, earning promotions in that time. For the past six years he has worked for the Commonwealth War Graves Commission, based at Cambridge City Cemetery.

He began cycling as a way of keeping fit and has upped his training in advance of the games in which he will compete as part of 72-strong Britain team in peak condition.

“I feel a lot stronger and fitter than I did in Toronto last year and the design of this prosthetic limb is helping me cycle harder and faster,” said Wayne, who will also be competing in the sailing.

“I am hugely appreciative of Eilidh and the Clinical Engineering Innovation team, in particular Maighread Ireland and Daniel Marsden, for helping to design this prosthetic limb which will hopefully help me bring back gold for Britain, Cambridgeshire and the NHS.”

Eilidh said: “For Wayne, my task was to prescribe and work with our prosthetic technicians to provide a limb which is comfortable, durable, lightweight and aerodynamic.

“When reviewing Wayne’s previous prosthesis I felt that by working with Clinical Engineering Innovation and our gait lab, we could come up with a design that would help improve his chances at the games.

“All cycling limbs need to be custom made and, even at Paralympic level, there are a large range of designs.

“We are pleased that Wayne is happy with our final design and we will all be cheering him at the games.”