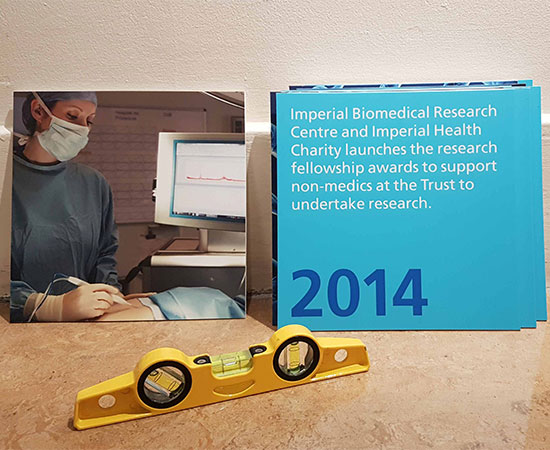 The nation celebrated the NHS turning 70 on 5 July 2018. Sable&Hawkes was commissioned by Imperial College Healthcare NHS Trust to deliver an exhibition to celebrate the Trust’s rich history and key milestones since the NHS was launched.

While the hospitals and people who make up Imperial College Healthcare NHS Trust have an even longer track record of innovation and achievement (Charing Cross Hospital turns 200 years in October 2018), the Hospitals that make history wall art exhibition was a specific request to collage and present the key achievements and milestones of the trust in the NHS era.

Layla Hawkins, Interim Head of Media at Imperial College Healthcare NHS Trust said of the project: “The exhibition was developed to celebrate the 70th birthday of the NHS and it was really important to us that the significant contribution of our hospitals to medical breakthroughs were acknowledged in this visual. Sable and Hawkes really understood what we wanted to achieve and the feedback from our staff and patients has been really positive; it’s given us all a chance to take a moment and realise what great work is carried out for our patients on a daily basis.”

The brief was to design a solution that could take into account a twin track approach to content, covering the seven decades in question (1948 – 2018), encompassing basic quick facts and the major events, milestones and personalities that played an important role in shaping both the NHS and Imperial. Imagery was to be a mixture of supplied stock, scanned historical and newly sourced imagery. The team also had to make allowance for the sites that the exhibition needed to work on, covering Imperial’s four key locations in London at St Mary’s, Hammersmith, Charing Cross and Western Eye. Each site had its own challenges from lighting to different sized areas, to needing to work on a specific stairwell in one instance.

With this in mind the need to marry clarity and impact with flexibility was key, so Sable&Hawkes decided upon a modular system of 127 individual panels that could be designed into their environments as those environments dictated. What you see above are images of the final panels and their installation at the first site at St Mary’s.

The exhibition was supported online and in video and is appearing in conjunction with a set of seven prints comprising the NHS 70th Anniversary Print Portfolio: a unique collection by seven well established artists who created new works to help fundraise for Imperial Health Charity which supports Imperial College Healthcare NHS Trust (for more information on the prints click here http://www.ccagalleries.com/artists/nhs-70th-anniversary-portfolio).