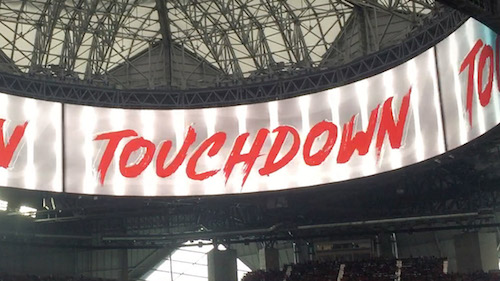 KISS’s Senior Web Developer Barrie Calver has just visited Jackson Spalding, an agency in Atlanta similar to KISS. Find out about the similarities, and the differences, to doing PR stateside.

KISS is the only integrated agency I’ve worked for. So when KISS offered me the opportunity to spend a week with a similar agency in the USA, I jumped at the chance.

As members of the Public Relations Organisation International (PROI), we are able to take advantage of exchange opportunities with organisations in different countries. This is something that KISS participates in regularly, to share best practice with fellow professionals and gain local insights into new markets.

Jackson Spalding, an agency with around 150 employees, is based in Atlanta. It’s a fair bit bigger than KISS, but has a similar relaxed, open and friendly environment.

Founded 23 years ago, Jackson Spalding is one of the largest independent marketing communications agencies in the south-eastern United States, serving clients around the world from its offices in Georgia and Texas. Its best-known clients include the Coca-Cola Company, Delta Air Lines and the Chick-fil-A fast food outlet chain, but the company also works with much smaller organisations.

Getting to grips with the Darkside

I was intrigued by the layout of the office, which is open plan, but sees people sitting in distinct teams – each of which has a name. The Chick-Fil-A account team sits in The Coup for example, while the general creative team inhabit the Darkside – this is not a reference to Darth Vader, rather to the lowered lighting levels that the team prefer. The tradition of using distinctive names extends even to the meeting rooms, which range from Moneypenny to Camelot and the War Room. As a creative myself, I resided in the Darkside for the week, where I felt very at home!

Tuesdays see a creative meeting in the War Room, where team members each share one of their week’s highlights. I contributed to the meeting with a presentation about KISS, which included a video I had put together about my life in Cambridge.

The team made me feel very welcome and I met some really engaging people. I was given a Vision and Values tour and learned a bit about how the company has grown. Similarly to KISS, some staff started out freelancing for the company and then ended up joining on a permanent basis.

The company mantra is “Find a better way”, which drives its mission to become the most respected and trusted marketing communications agency. Staff at Jackson Spalding have never had job titles, just areas of expertise, although this is something currently being reviewed now that the company has grown so much. There is a mentoring programme that helps employees to focus on their goals and think about their future plans.

Studio within a studio

The company started out with just eight people and over the years, as new people have brought new skills, Jackson Spalding has branched out into new areas. It has a great philosophy of keeping talent. Brian Steely, for example, joined as a PR intern in the early days of the company. He retrained as a designer at evening classes, but rather than leaving to start his own business, he started his own business from his desk at Jackson Spalding, while continuing to do some work for the company. Steely Works is now a “studio within a studio” at Jackson Spalding, boasting clients like Nike and Mumford & Sons.

I was interested to learn that Jackson Spalding has a list of “favourite” brands it wants to target. For founder Glen Jackson, this included Chick-Fil-A. The fast food chain’s charismatic founder Truett Cathy was an inspiration to Glen, who had read Truett’s book It’s Easier to Succeed than to Fail. He happened to recognise Truett at an airport, got talking to him and Truett gave him a card for a free chicken sandwich. Glen kept the card in his wallet for 15 years, finally winning Chick-Fil-A’s business after many conversations with its managers.

One of Jackson Spalding’s early jobs was for Walmart. There was quite a buzz about old baseball cards at the time – the sort that used to be given away with packets of cigarettes. They are now collectors’ items and Walmart had bought a rare Honus Wagner card, which is one of the most sought after baseball cards. Jackson Spalding helped Walmart set up a live giveaway of the card on the Larry King Live show, giving Walmart a lot of exposure.

Spending time at Jackson Spalding really was insightful and it was great to learn about the similarities, and differences, between Jackson Spalding and KISS. I would highly recommend participating in an exchange with an organisation similar to your own if you ever get the chance.