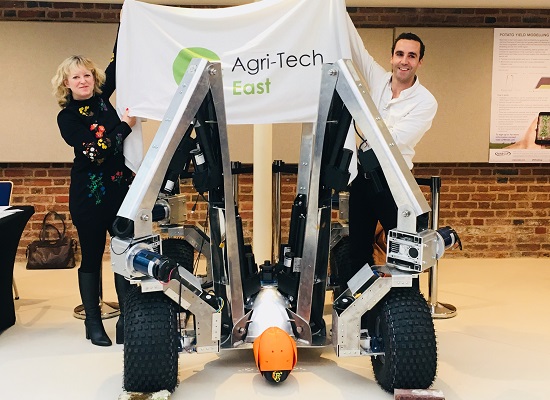 By delivering a ‘triple-helix’ model for innovation – which brings together industry, research and government – Agri-Tech East is helping to facilitate the rapid growth of the agri-tech sector. Priorities for future investment in agri-tech was the theme for its fifth annual REAP conference, held yesterday (Weds) in Cambridge.

The event started with an exclusive breakfast meeting where invited farmers were given the ear of government to give input into its R&D proposals, and culminated in a lively debate where experts from different disciplines argued their case for a technology that will provide the greatest returns.

Dr Belinda Clarke, Director of Agri-Tech East, the independent membership organisation, explains that an integrated approach is fast-tracking innovation. “In just four years we have seen an impressive uptake of new approaches by our farmer members; we have also seen a number of start-up technology businesses grow and prosper with the support of these entrepreneurial producers. These collaborations have been greatly helped by the availability of public and private funding through various channels.”

These companies include: Small Robot Company, which offers farming as a service, was part of the Start-Up Showcase at last year's REAP conference, and unveiled its first working prototype yesterday; Farming Data, which as a concept won the Agri-Tech East GROW business plan competition last year and is now announcing a trial with 1,000 Colombian farmers; and PBD Biotech, which launched its rapid test for bovine TB and Johne’s Disease at REAP last year and now has UK government approval and international trials in place.

The triple helix approach is well respected internationally as a tool to enhance innovation and promote economic development, but it is difficult to achieve in practice as its success relies on blurring the traditional boundaries between universities, government and industry.

Core to Agri-Tech East’s approach is framing the challenges faced by farmers in terms that the technology and research communities can relate to. The power of this was seen in its first Hackathon, held earlier this year, where a novel approach to controlling the pernicious weed blackgrass was developed overnight by a team using software developed for designing driverless cars.

Defra, together with Innovate UK – the national funding agency investing in science and research – participated in the Farmer Breakfast to tap into this community.

Ben Rayner of Defra’s Agri-Food Innovation Team comments: “During the Health and Harmony consultation we held a number of workshops to gain feedback on our proposals, including one hosted by Agri-tech East. The Farmer Breakfast will give us the opportunity to update on progress since the consultation and also to get views 'from the coal face' on how we ensure our schemes are farmer focused and addressing real-world challenges to the farming sector.”

In September, Defra announced its plans for post-Brexit agriculture with new legislation that will be underpinned by innovative measures and investment in R&D.

Rayner continues: “We have ambitious plans for the future and our package of R&D proposals will support future innovation and sustainable growth in agriculture. We want to increase farmer involvement in, for example, R&D syndicates, which will ensure farmers are at the forefront of the innovation process.”

Dr Clarke says: “We have been delighted that so many leading farmers have taken up the opportunity to attend, and it is encouraging to see Defra feeding back and capitalising on on-the-ground experience and expertise to shape plans for future UK farming.”

Farmers are also interested in how some of the other measures in the Agricultural Bill will work in practice. Savills sponsored the Farmer Breakfast; their head of food and farming in the East, Alex Bragg, comments: “Clearly minds are now focused on the post Brexit landscape. Direct funding will disappear over time and instead we’ll move towards funding for one-off projects, efficiencies, technology and the environment. This breakfast gives farmers a fantastic opportunity to engage with Government and voice the ways in which they feel support can be directed.”

With technology developing at an unprecedented rate, the conference also featured an eight-strong panel of industry experts debating how to prioritise investment in agri-tech to reap the greatest returns.

The debate was chaired by Barclays’ Head of Agriculture, Mark Suthern, who comments: “It’s all about maximising the resources we’ve got – and we shouldn’t underestimate the resilience and innovative nature of UK farmers.”

Find out more about REAP at reapconference.co.uk

Agri-Tech East is an independent business-focused cluster organisation for the East of England. It is creating a global innovation hub, to improve the international competitiveness of plant and crop-based agriculture and catalyse economic growth.