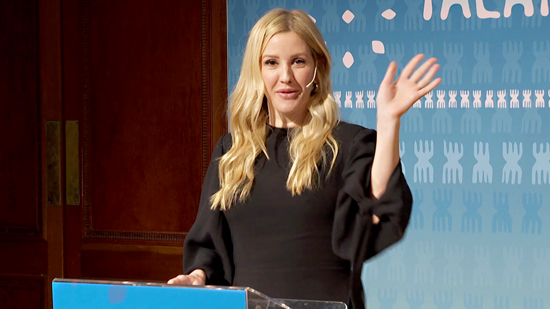 An event at the Royal Institution in London - filmed and live streamed by WaveFX -drew a number of influential speakers from politics, business and civil society, including actor Ralph Fiennes, Prime Ministers from New Zealand and Fiji, plus global music star Ellie Goulding.

British singer-songwriter Ellie Goulding is a Global Goodwill Ambassador for UN Environment, joining the fight to save the lives and habitats of people and animals by cleaning up our air and seas, fighting climate change and protecting species.

The UN Refugee Agency reports that an average 21.5 million people have been forcibly displaced by sudden weather-related hazards like floods, storms, wildfires, and extreme temperature ever year since 2008.

Ellie commented: “It’s a huge honour to become a UN Environment Global Goodwill Ambassador. Yes, we face huge global challenges, but we are also taking game-changing steps forward and that should inspire us.

“My focus will be on amplifying the activism of young people committed to creating a bright future. I want as many people as possible to become advocates for the planet.”

Ellie is also backing UN Environment’s #CleanSeas campaign. Each year, at least 8 million tonnes of plastic end up in the oceans – the equivalent of one dumper truck a minute – harming marine species and getting into the human food chain, with plastic now found in salt and shellfish.

WaveFX filmed and live streamed the event - produced by 5x15.com - to several Facebook pages, including COP23, the informal name for the United Nations Framework Convention on Climate Change (UNFCCC)

The WaveFX webcasting team provided several 4K cameras and live vision mixed the two-hour event, including graphics and videos, to a global audience.

WaveFX regularly works with production companies, event organisers and venues to offer their clients a webcasting service. It is a completely white label streaming company and happy to wear any company T-shirt.

For more information on how WaveFX can help film and stream your next event please call Jamie 01223 505600 or email stream@wavefx.co.uk