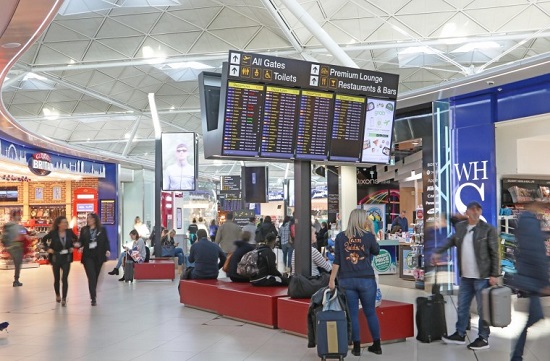 A record breaking 1.98 million passengers passed through London Stansted in November, up 8.7 per cent on 2017, ahead of what is expected to be the airport’s busiest ever festive season.

The airport’s busiest November saw 158,000 more passengers use Stansted than in the same month last year, with load factors – the average number of seats occupied on each flight – reaching 87 per cent, the second highest ever total for November after 2016.

The countries recording the strongest growth during the month compared to November 2017 were Austria, Turkey, Portugal and France while domestic routes including Edinburgh and Belfast also reported significant increases in passenger numbers.

During the upcoming festive period, Stansted is expecting nearly 1.2 million passengers to take to the skies with the busiest overall day forecast to be 30 December when around 86,000 passengers will pass through the airport.

The 12-month moving total now stands at over 27.8 million, an increase of 7.3 per cent over the previous year.

Ken O’ Toole, London Stansted’s CEO, said: "The first full month of the winter flight schedules and high airline load factors produced another strong performance in terms of passenger growth at London Stansted, and the busiest November for the airport on record.

"The growth trend will continue over the coming weeks as we prepare for our busiest ever festive getaway when we expect to welcome nearly 1.2 million passengers to the airport between 21 December and 6 January.

"To ensure all our passengers enjoy a stress-free start to their holidays we will have additional staff on hand in the terminal supporting colleagues working around the clock over the festive period to provide the best possible service and airport experience."