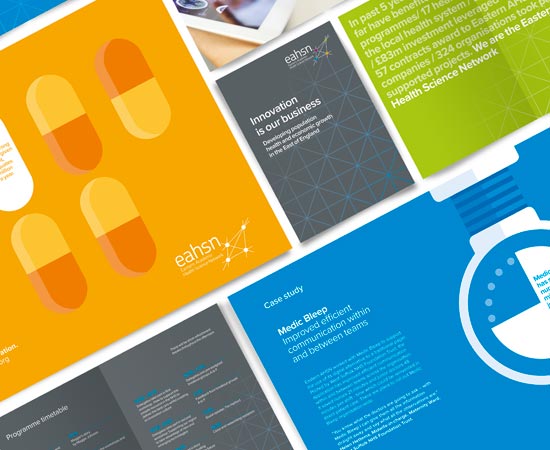 Adrian Penrose, Interim Head of Communications at the Eastern AHSN said of the event and working with Sable on the project: "This event launched our new business offering to innovators and the NHS across our region. Sable&Hawkes quickly got to grips with what we needed, adding expertise and insight at every stage, bringing vitality and creativity to our approach.”

The brief was simple:  brand this key event of the year and deliver everything from table cloths to podiums, banners to posters and programmes in three weeks. Working to such a tight deadline, clarity and simplicity were key which is why the collateral focused on a simple development of the Eastern AHSN identity to incorporate the use of icon illustrations as a way of telling their story quickly and creatively.

A number of impactful projects were designed into case studies which were produced as A0 posters. These appeared around the event environment along with more generic posters covering the role and value of the Eastern AHSN. They were supported by an overall event look which was applied to both pre- and on-the-day marketing materials including a brochure, programme, stand and folder.

The event itself showcased some of the many innovations that have benefited the NHS and patients across the region as well as proposing potential future solutions for discussion most likely to influence patient care over the next ten years.  Attendees included NHS board level representatives, senior academics, innovators and third sector partners from across the Eastern region.

For more information on Sable&Hawkes contact Adrian Kimpton on: