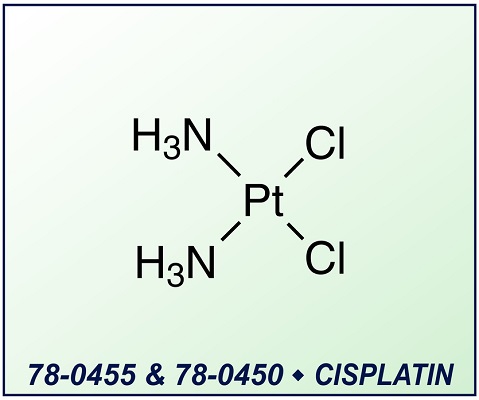 It is the 40th anniversary of the first FDA approved, patient based anti-cancer drug Cisplatin, which revolutionised cancer treatment from 1978.

Since that time there have been even more developments  in the treatment of cancer, but cisplatin remains one of the most widely prescribed and effective[1] treatments for many types of cancer.  The compound was first discovered at Michigan State University by biophysicist Barnett Rosenburg, but the discovery was not intentional.  While researching the effects of electromagnetic energy on cell division in E.coli bacteria, Rosenburg and his colleagues found that the bacteria grew into long filaments, almost 300 times the usual length.  This change was due to the electrolysis products arising from the platinum electrodes.  Extensive research over the next decade let to the discovery of cisplatin as a cancer treatment since it interfered with the growth and advancement of cancer cells within the body.

The use of cisplatin as an anti-cancer treatment has resulted in a countless number of lives saved.  However, there are some severe side-effects that can occur from using platinum-based drugs.  These side-effects, as well as the development of cisplatin resistance in some cancer patients, have fuelled continued research into platinum-based compounds in order to provide alternative options for patients.  In 1989, the FDA approved the use of carboplatin (78-0255) as an anti-cancer drug.  Carboplatin had a high success rate with certain cancers, such as ovarian, on which cisplatin had a minimal effect.  In 2002, an additional platinum-based drug, oxaliplatin, was approved by the FDA as well.  Researchers in this field continue to discover and develop improved treatment options for this disease that will maximize results while minimizing the negative side-effects of the drug. ­­

For decades, Strem has been manufacturing cisplatin (78-0449) and carboplatin (78-0256) under cGMP in our kilo-lab facility (class 10,000) in Newburyport, Massachusetts.  Complete documentation is available for all products manufactured under cGMP including validation and stability studies.  As developments in the study of platinum-based cancer treatments continue to grow, we hope to add these to our product line as well and help in the fight against this disease.