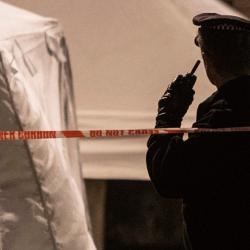 Knife crime data from a 12-month period could be used to help forecast the London neighbourhoods most likely to suffer a fatal stabbing the following year, according to latest research.

Cambridge criminologists worked with a Metropolitan Police detective to show that the number of assaults resulting in knife injuries over one year correlated with an increased risk of deadly knife crime in the same small areas the next year.

DCI John Massey from the Met’s Homicide Command manually trawled through thousands of knife crime records to pick out and “geo-code” incidents where people were stabbed and cut but survived during the 2016/17 financial year.

This may be the first dataset of non-fatal knife assault “hotspots” in the UK. Current crime statistics do not distinguish between incidents without injury – displaying of knives during robberies, for example – and those where knives have wounded.

Massey found 3543 knife assaults had occurred during the 12-month period: a ratio of 66 non-fatal stabbings for every knife homicide that year.

Each assault was coded to one of London’s 4835 local census areas – some as small as a few football fields – and compared to the locations of the 97 homicides from the following 2017/18 financial year.

Some 2781 areas, over half of London, had no knife assaults at all in the first year. Of these areas, 1% saw a homicide in year two.

Of the 41 neighbourhoods that had six or more injuries from knife assaults in the first year, 15% went on to suffer a homicide the following year.

The researchers argue that this reveals a large increase in homicide risk: these top assault hot spots were 15 times more likely to suffer a knife homicide the following year than all areas – the majority of London – with no knife assaults.

They say that data on knife assaults provide a “consistent pattern” of greater knife homicide risk the next year. Census areas with two to four assaults had around a 4% risk of homicide in year two, and those with five assaults had a 9% risk. Six or more assaults equated to a 15% risk.

The researchers suggest that with the right technological approach, police could receive automated daily updates of homicide risk based on the latest data – helping to guide patrol allocations. The study is published today in the Cambridge Journal of Evidence-Based Policing.

Image: Police at a crime scene in Leyton, east London after a man in his twenties was stabbed to death in March of this year.