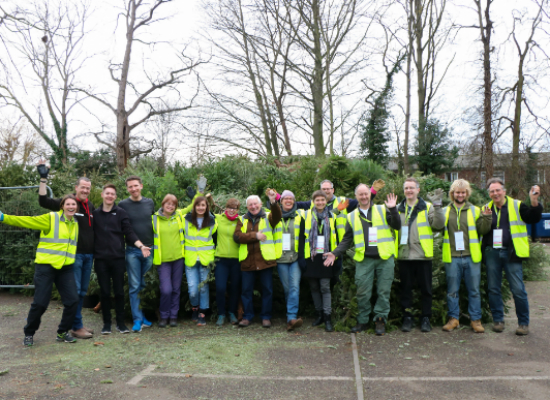 Volunteers and supporters helped raise over £26,500 for the Hospice collecting recycled Christmas trees over two days in January...

The Christmas tree recycling and fundraising initiative has grown quickly since it was first launched by the Hospice’s fundraising team in 2016, when it raised £3500: last year the scheme raised £12,600 with 1000 trees collected. This year, the team realised that their initial target of £15,000 had been conservative as tree registrations quickly increased to 1600, with the list of collection addresses ballooning to 1860 by the time registrations closed, on Wednesday 9 January.

Arthur Rank Hospice Charity, delighted by the Cambridge community’s whole-hearted support of the scheme, were then faced with the challenge of ensuring they were able to pick up and transport more than 1800 trees across two days. Community Fundraiser Bec Beattie explains: “Our Christmas tree collection scheme has grown in popularity every time we have done it and as we have added new postcodes each year. We hadn’t quite expected this fourth year to be such a resounding success: as the deadline approached and the number of tree registrations continued to rapidly grow, we realised that we would need at least double the number of helpers and vehicles we already had on board, to cope with the demand!

“We put out an appeal and - thanks to the support of our local radio stations, newspapers, and incredible supporters who helped spread the word to family and friends – doubled the number of people and vans on our volunteer collection team within two days!! It is thanks to them generously giving up their time that we were able to complete our ‘treasure hunt for Christmas trees’ and collect over 900 each day.”

On Friday and Saturday, teams of two or three volunteers in fifty different vans, made their way around the streets of Cambridge, picking up trees from pre-registered addresses. Once vans were full, they dropped their pine-needle-stuffed loads off at designated collection points, where they were loaded onto larger ‘sweeper’ lorries generously loaned by Cross Country Carriers, JPS Installs and G.Webb Haulage Limited and into skips which had been kindly loaned to the Charity by Mick George. The final stop for the trees was then Cambridge City Council’s Amey Cespa waste management depot in Waterbeach, where they were composted.

Anthony Jones from Babraham Research Campus – who has been has been involved in the initiative ever since it began four years ago – has been impressed by the scheme’s growth: “The first year I think we did about five hundred trees. We had about twenty volunteers and there wasn’t that many vehicles, so I’m amazed at how many people have turned up today! We’re all given a list of addresses and a map where all the trees are. It’s interesting because we see parts of Cambridge and the surrounding areas we never knew existed. If there’s a tree sitting there outside a house that’s usually our guide: we check the address and then we know that’s our tree to pick up.”

Eileen Hughes volunteered for the first time this year and adds: “It’s just a few hours of my time, a bit of exercise and a great way for the Hospice to make money, so it’s a no brainer really. The atmosphere is great! I’ve been chatting to lots of other volunteers and everybody’s doing it for different reasons. The Hospice helps so many people in the community so it’s an honour really, to help them today.”

90% of the funds raised will help fund Arthur Rank Hospice Charity’s care to those living with a life-limiting illness in Cambridgeshire, with 10% donated to a local cause nominated by those who volunteered to help with the tree collection. The Hospice needs to secure £8.1 million every year to deliver its services free of charge to patients and their loved ones, of which only about half currently comes from commissioned income. The Charity is hugely grateful the local community which contributes the remainder and whose support with initiatives - such as the Christmas tree recycling scheme - is critical in helping make every moment count.

Arthur Rank Hospice Charity would like to extend it’s grateful thanks to every single one of the volunteers involved in the collection scheme and its promotion; Cambridge Car and Van Rental (CVR) who loaned four vans free of charge; each of the very generous local companies who supported the scheme who are too numerous to mention but whose support is thoroughly appreciated; Amey Cespa at Waterbeach and Cambridge City Council for their support in recycling the trees.

If you would like to help by volunteering or sponsoring the Hospice’s next annual Christmas tree recycling scheme in January 2020, please email bec.beattie@arhc.org.uk or call 01223 675885 to register your details.