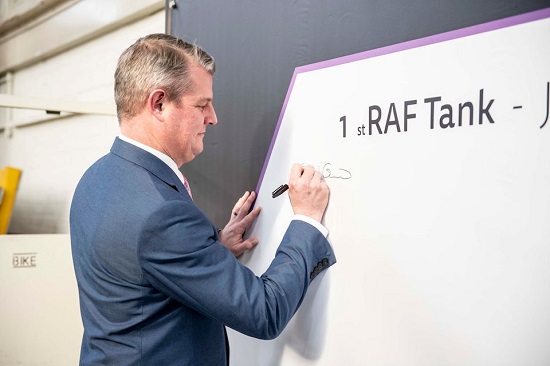 Defence Minister Stuart Andrew has announced the first fuel tanks supporting the UK’s new fleet of submarine hunting aircraft have rolled off the line in Cambridge.

The major milestone comes after the first cohort of RAF aircrew commenced their training for the programme earlier this month, marking the start of a vital enhancement of the UK’s military capabilities in the maritime environment. The P-8A Poseidon is a new aircraft for the RAF designed to operate for long durations over water in maritime patrol roles, in particular anti-submarine, anti-shipping and search and rescue.

The Minister made the announcement for the P-8A programme during a visit to local Cambridge firm, Marshall Aerospace and Defence, where the fuel tanks for the aircraft are being produced.

Marshall Aerospace and Defence, which trained over 20,000 pilots during World War Two, manufactures the fuel tanks for sub-hunters globally, including for the United States Navy and Royal Australian Air Force. Marshall has been producing tanks for P-8 aircraft since 2009, and is due to deliver the 700th to Boeing this month. The skill involved in the design of this specialist equipment helps keep our Armed Forces safe and provides global protection to NATO and Allies’ submarines and warships, while sustaining 60 local jobs.

Minister for Defence Procurement Stuart Andrew (pictured) said: "Local companies, like Marshall Aerospace and Defence, form the backbone of our economy. The MOD has invested £141m in Marshall and I am proud to recognise the vital role they play in shaping our world-leading defence industry. Our new submarine-hunters will be a potent deterrent to our adversaries and a dependable asset for the UK and our allies, and the innovative defence equipment built by Marshall will help us combat a range of intensifying threats."

The Poseidon MPA aircraft is based on the Boeing 737, which is already supported by UK industry, providing several hundred direct UK jobs at companies including Boeing, Marshall’s, Martin Baker and General Electric UK.

The innovative sub-hunting fleet, designed for future growth and adaptability, will enhance the UK’s specialist airborne maritime patrol capability through advanced, state of the art anti-ship missiles, sonobuoys and torpedoes. The aircraft will also contribute to the protection of the UK’s nuclear deterrent and the UK’s new aircraft carriers, seek to locate and track hostile submarines and enhance maritime Search & Rescue (SAR) capability.

A total of nine submarine hunting aircraft will be delivered to RAF Lossiemouth in Scotland in Spring 2020, bringing future opportunities for high-tech employment to the region. The MOD and Boeing have invested £100m in the infrastructure that will house the aircraft at RAF Lossiemouth. When the fleet is fully operational, an additional 470 personnel will be based at RAF Lossiemouth. Further roles are also expected when the training and support services are established at the new facility.

Chief of Materiel (Air) for Defence Equipment and Support, Air Marshal Julian Young said: "The work carried out under the P-8A programme demonstrates how we work collaboratively with industry to deliver vital capability to our Armed Forces - a proven approach that is leading the way internationally. This battle-proven aircraft, already in service with our allies across the globe, will be crucial in the protection of our continuous-at-sea deterrent as well as our new aircraft carriers, helping to tackle the threats we face in the skies and at sea."