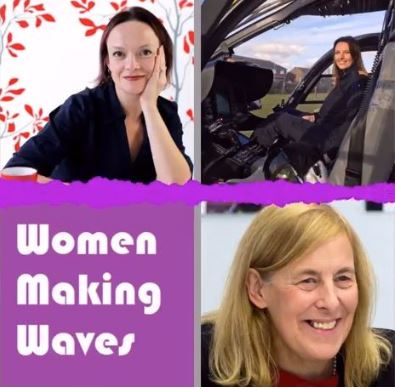 Sue will be discussing her background in broadcasting, having previously worked for the BBC, ITV.com, Yahoo and Magic FM. She'll also talk about founding Sookio - in the height of the recession, with a young baby or two, after going through redundancy (twice!) - and the leadership skills she's picked up along the way. Sue has recently been appointed to the Board of Cambridge 105 Radio and looks forward to frequently visiting the studio and presenters.

Sue’s in good company - also on the show, Sue will be accompanied by Dame Janet Thornton, one of the world's leading researchers in structural bioinformatics, and Captain Jennifer Stevenson, a helicopter pilot working with East Anglian Air Ambulance.

Women Making Waves, presented by Suzie Thorpe and Linda Ness, features women who each play a positive part in shaping our society and are at the forefront of empowering change.

Sookio is a digital agency based in Cambridge, UK. We help our clients communicate with confidence through quality content for the web and social media.