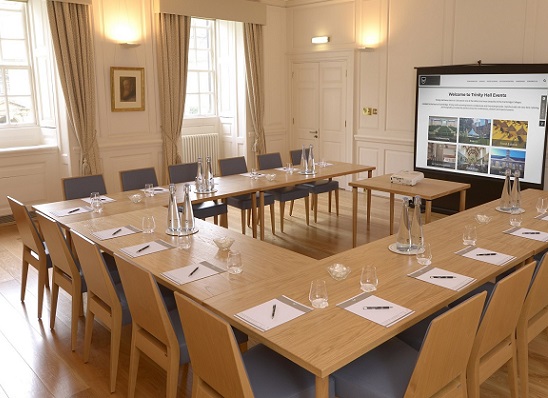 Trinity Hall is delighted to reveal the newly refurbished Leslie Stephen Room, a beautiful historic room which is among the Cambridge college's most popular spaces for meetings and special events.

The room is named after Sir Leslie Stephen (1832-1904), alumni of Trinity Hall and leading essayist in literary criticism who was also father of writer Virginia Woolf and artist Vanessa Bell.

The effect has been to lighten and lift this prime events space, utilising the room’s abundance of natural light and first floor setting overlooking the College’s Front Court.

The Leslie Stephen Room now offers an even more flexible space for meetings, conferences and dinners and the room is all set for your spring and summer events.

The Leslie Stephen Room is the perfect space for a meeting of minds. To arrange a viewing at Trinity Hall or to make a booking enquiry, please contact the Events Team: Tel. 01223 764444 or events@trinhall.cam.ac.uk

Trinity Hall is the fifth oldest College in the University of Cambridge. It was founded in 1350 by Bishop Bateman, originally for the study of canon and civil law. Enjoying stunning architecture, historic grounds and attractive riverside views, Trinity Hall is also the perfect venue for residential conferences and day meetings, as well as dinners, drinks receptions and other special events.