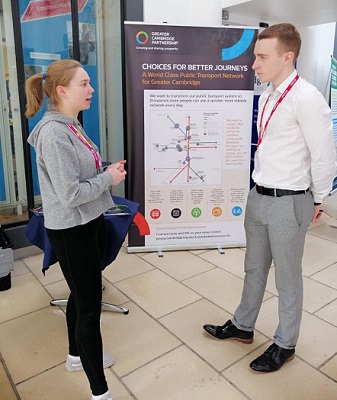 Thousands of people living across the Greater Cambridge area are being urged to share their views on congestion-busting methods before a survey closes at the end of the week.

Opinions are being sought on ways to make the best use of the available road space and potential measures that could fund the £20m required every year to provide a world-class public transport system.

The Greater Cambridge Partnership’s ‘Choices for Better Journeys’ survey asks for views on transforming public transport and a range of options to reduce congestion and improve air quality.

Over 4,000 people have already completed the survey to have their say, and GCP officers have spoken to hundreds more at pop-up events at workplaces, Park and Ride sites, train stations and Cambridge United’s Abbey Stadium.

The survey is open until midnight on 31 March to tell the GCP your views on a range of issues outlined in the Choices for Better Journeys campaign – these include:

Rachel Stopard, Chief Executive of the Greater Cambridge Partnership, said: “We’ve had a terrific response to our Choices for Better Journeys engagement so far, but it is important that as many people as possible fill in the survey to tell us about what they want from better public transport and what they think about a range of ways to cut congestion.

“We have a real opportunity to improve the Greater Cambridge area and provide a competitive alternative to the car. Better public transport along with more cycling and walking routes will help people get around far more easily and provide wider benefits too.

"But we need to know what people think about the choices available, so with less than a week to go I’d encourage anyone who has not yet done so to go to Consult Cambs and complete the short survey.”

GCP officers have also been speaking to students in colleges across the area. Last week, students at Cambridge Regional College spoke about the challenges they face travelling into and out of the city - and what they want from better public transport in the future.

Corey Griffin, who travels on the bus from Newmarket, said his bus often gets stuck in traffic at peak times which can make him late for lectures. He would like to see traffic on the roads reduced to ensure more reliable public transport services run in and out of the city.

Sarah Allen, student liaison and enrichment coordinator at Cambridge Regional College, said: “We know that some of our students would like to improve their journey times to college. We provide a network of buses for areas that public transport doesn't reach and we would highly value improved networks to enable the community to access the educational services on offer in the college and the city.

"It has been great for students to have an opportunity to share their ideas with the Greater Cambridge Partnership as part of the Choices for Better Journeys campaign.”

Opinions are being sought on ways to make the best use of the available road space and potential measures that could fund the £20m required every year to provide a world-class public transport system.

Reduced congestion would allow faster, more frequent and reliable journeys on public transport while also helping to improve air quality– with a report released last month revealing that 106 deaths every year in Greater Cambridge are attributed to poor air quality.

To have your say visit Consult Cambs and complete the survey before midnight on 31 March.