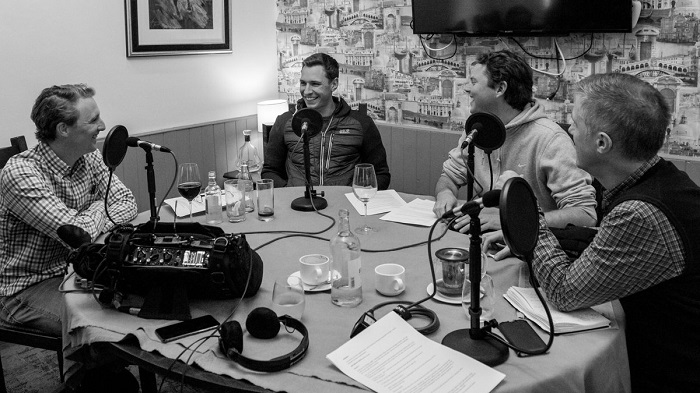 Join Newmarket trainers George Scott and Charlie Fellowes for a twice per month podcast chatting about the world of horse racing.

George & Charlie Off The Bridle is a mix of opinion and racing banter, with co-host Tony Rushmer as the peace-keeper, and special guests joining them to add to the conversation.

In episode one called The Bet, George and Charlie talk about the cut in prize money at ARC tracks, about action including boycotting several races, and how trainers - and owners - can have an impact by supporting races that offer better prizes, which in turn is beneficial to everyone.

They also talk about taking part in the Dubai cup and generally of taking horses abroad to race including to Qatar, how they compare with each other in terms of winners and prize money, and how some trainers feel more able to speak their minds!

In episode two, Oli Bell from ITV Racing is the special guest and talks about his recent Frodon-Frost moment at Cheltenham, how tough it is to ask good questions on camera, his love of cricket, and his boxing 'career'.

The conversation also covers a tale from a wedding, how Fellowes had his hand broken by an England bowler, and a Deontay Wilder stalking story, as well as a look ahead to the flat season.

The podcast is produced by Carl Homer of Cambridge TV http://www.cambridge-tv.co.uk/  and hosted by the King's Head pub in Dullingham.