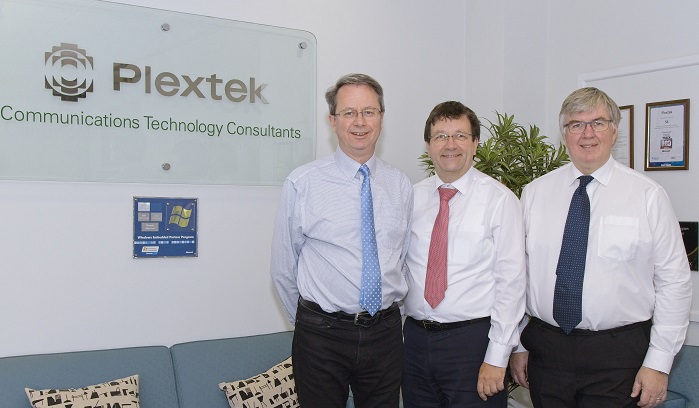 Plextek, the youthful Cambridge tech-mafia start-up is, incredibly, 30 today. The renegade upstarts Tim Jackson and Colin Smithers broke out from PA technology in late 1988 and in the secret move were contacted by customer Ian Murphy, claiming “I’ve heard you are leaving – you need me!” Today Plextek continues to operate as a highly regarded technology consultancy but has also spawned multiple successful spin-outs.

We are so proud of our agile approach to business; we will always push the boundaries and impact the future of our technology-driven world.

Plextek was originally set up as a specialist communications product and system design house, exploiting the founders’ core competences. Over the years this has evolved from cordless phones, data links and propagation expertise into adjacent areas such as Stolen Vehicle Recovery (SVR) tracking devices, radar and sonobuoys and ultimately to medical products.

The first spin-out was Radiant Networks in 1997, which pioneered advanced mesh networks for broadband connectivity to the home using directional beams prior to the 2001 tech crash. This also represented the founders’ venture finance finishing school.

The ongoing 26-year relationship with TRACKER Network that started with SVR led to working with Boston, US licensor LoJack and to Plextek becoming sole supplier to their 30-country licensee base, now as design and supply. To date over 6 million devices have been supplied and this led to the creation of spin-out sister company Redtail Telematics as Plextek’s branded outlet for telematics products and services. Redtail has in turn supplied devices into TRACKER Network, LoJack, ingenie, Admiral, AXA, By Miles, Direct Line, Concirrus, Acorn, and Unigarant. The technology has evolved from just black boxes to now include global cellular connectivity, high resilience real-time databases, a crash reconstruction portal and Apps for driver scoring and fleet management. A real success story for the vehicle industry and Cambridge business.

In 1995, Plextek conquered very long range low bandwidth ‘UNB’ radio links and this technology was then subsequently evolved and deployed in a specialist utility metering and management system for Street Lighting and the creation of spin-out of Telensa. Telensa is by volume the world’s largest deliverer of radio managed street lighting, greater than Philips and GE combined. Smart technologies like these are key to delivering safe and sustainable urban environments in the future.

Early Plextek solutions in radar components and modules for such customers as MBDA and BAE Systems Ltd led in the doldrum period after the 2001 tech recession to the creation of the Blighter electronic scanning radar. This has since been pioneered by Mark Radford and his team and spun out as Blighter Surveillance Systems (BSS). Their technology is used by UK MOD in Afghanistan, in South Korea monitoring the DMZ, US DOD in Mosul and at Gatwick and Heathrow airports, now detecting and supressing drone activity.

In addition to Redtail Telematics, Telensa and Blighter, the arrival of Liam Devlin led to specialist spinout group ‘Plextek RFI’. Plextek RFI creates microwave IC designs in GaAs and GaAn to tier-1 organisations such as Sony, Huawei, Samsung, Quorvo, Huawei and Analog Devices. They also enjoy royalties from their own designs.

Whilst supporting and enabling multiple spinouts, the central technology consultancy has continued to deliver high-end services to International clients from their Cambridgeshire office. Now the Plextek consultancy, led by CEO Nicholas Hill, concentrates on creating world-leading high performance solutions for its customers in the key areas of medical, smart cities, Industry 4.0, security & defence.

Overall the Plextek Group of sister companies has been responsible for four Queens awards for Enterprise, multiple Sunday Times Tech- and Profit Track awards and dozens of patents.

Group Chairman Dr Colin Smithers states: “I don’t think we ever thought as far forwards as 30 years but somehow we have arrived and with a great group of creative and capable people spread over multiple organisations, helping well over 500 customer organisations from start-ups to FSE-100 organisations and creating world beating technologies in multiple markets. We are so proud of our agile approach to business; we will always push the boundaries and impact the future of our technology-driven world.”