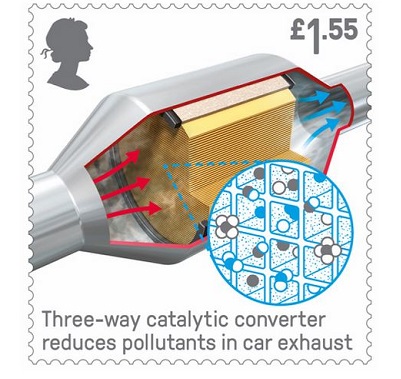 World-class inventions and innovations have had a huge impact on many aspects of modern life, from medicine and computing to travel and infrastructure. To highlight Britain’s contribution, Royal Mail have worked with the Royal Academy of Engineering on a stamp set that features marvels of British engineering from the last 50 years.

In addition to JM’s three-way catalytic converter, the set includes the Raspberry Pi (the smallest of computers), the Falkirk Wheel (the world’s only rotating boat lift) and the monumental tunnel boring project that will enable Crossrail.

Making the air we breathe cleaner and healthier, JM’s three-way catalytic converter scrubs car exhausts of harmful gases. Today cars are far less polluting than they were 50 years ago and JM now supplies the technology in around a third of the cars on the road, preventing 40 tonnes of pollutants from entering the air every minute.

Fitted to petrol powered vehicles worldwide, it turns carbon monoxide, unburnt hydrocarbons and oxides of nitrogen into carbon dioxide, water and nitrogen. It does this with the use of metallic catalysts containing platinum, palladium and rhodium that are coated onto a ceramic honeycomb ‘monolith’ through which the exhaust gases flow.

Chris Morgan, Technology Director at Johnson Matthey, commented: “Being recognised with a stamp celebrating British Engineering is a huge honour for employees past and present who have been involved in Johnson Matthey’s ground-breaking work behind the catalytic converter. Every year, our catalytic converters prevent some 20 million tonnes of pollutants from entering the atmosphere, helping to make the world cleaner and healthier.”

The three-way catalytic converter was pioneered in the early 1980s and Johnson Matthey Group was awarded the Royal Academy of Engineering’s MacRobert Award in 1980 for this innovation; the UK’s most prestigious and longest running award for engineering excellence.

Dr Dame Sue Ion DBE FREng FRS, Chair of Judges for the Royal Academy of Engineering MacRobert Award, said: “The UK is a global engineering powerhouse with many world firsts developed here that have both benefitted our economy and helped to transform people’s lives for the better. This wonderful new set of Royal Mail stamps perfectly encapsulates the technical and commercial achievements made by British engineers over the last 50 years.”

Philip Parker, Royal Mail, said: “British innovation in engineering is world renowned. This stamp issue proudly celebrates the projects and inventions which showcase this, as well as demonstrating the extraordinary range of disciplines that British engineers excel in.”

Download the Royal Mail’s press release for more information on all other stamps in their new collection.