Help Us Be There: Arthur Rank Hospice urgently needs your support 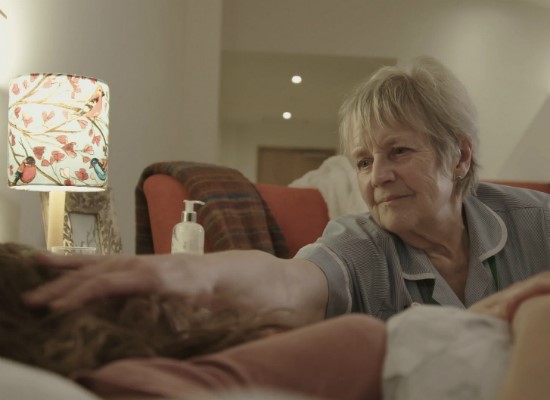 Arthur Rank Hospice is urging the Cambridgeshire community to ‘Help Us Be There’.

The Charity’s Hospice at Home team provide vital end of life care, overnight, to patients in their own homes across Cambridgeshire. Regrettably - due to limited funding - each night, the team is unable to provide care to one in three patients referred to them, whose choice it is to die at home.

Arthur Rank’s Hospice at Home team provide specialist end of life care, seven days a week, 365 days a year. Patients believed to be in the last two weeks of life, who wish to remain at home are referred into the service through their GP, local hospital or registered nursing team. One of the service’s Healthcare Assistants (who are specialists, trained in palliative care) will then visit a patient in their home overnight, between 10.00pm and 7.00am, to provide hands-on support. They help manage the individual’s symptoms and offer emotional, psychological and bereavement support to both patients and their families. An on-call Registered Nurse can give additional assistance when more complex problems or a need for extra or different medication arises.

Hospice at Home is funded by Arthur Rank Hospice Charity, so the care given to patients who choose to remain in their own home - and the support provided to their families - is free of charge. However, the cost of one night of care for each patient is £472. Sadly, difficult decisions need to be made every day by the team, as to which patients and families need their care most each night. Sarah Chipchase, one of the service’s Clinical Nurse Specialist explains:

“Every day we’re having to turn away about one third of our patients. As a team we just don’t have enough people. It’s heart-breaking”.

As part of the campaign, the Charity have shared a powerful film, produced in partnership with South Cambridgeshire based production company Mill River TV. The film introduces the ‘Help Us Be There’ campaign and features two personal stories: one from Xanthe Barker whose husband Sam was cared for by the Hospice at Home team in July 2018 and another from Michael Barnes whose wife Svitlana was cared for by them, in February 2019.

Michael met Svitlana in Ukraine in 1997, when he worked for the British Government and she was an interpreter and translator.  She was a fantastic linguist who later set up her own investment magazine, translated poetry and was “always very determined to see all of these things through”. Their relationship was “not materialistic in the least” and based on very simple values which they shared: “Like many people she just wanted to make the world a better place.”

Modest and likeable, and with so many different elements of work and life, Svitlana had friends all over the world.

Michael adds:  “She was incredible really because it was always so understated, she was so modest.  She never blew her own trumpet. She just got on and did things and she was never in your face. I think that was one of the reasons she had so many friends; why so many people loved her - and I loved her - for who she was.”

Tragically, Svitlana developed metastatic breast cancer, which became very aggressive towards the end of her life. She was just 44 when she died:

“One of the things that has been really hard about Svitlana’s illness and her passing is the fact that she was only 44 years old.  That is a really hard thing to bear for me and for all her friends and family; for everybody that knew her.  If it’s possible, I think it has made her passing even sadder and more difficult to comprehend than it already is.”

“She was very determined, as she was in all things, to be at home. That was her wish.”

Michael feels that the support they received from Arthur Rank’s Hospice at Home team during this time, was critical:

“If we hadn’t had the support that we did have from the Hospice at Home team for those last couple of nights, I think I would have found it extremely difficult. […] Obviously, it was still the most stressful thing that I have ever had to go through.  But, as it transpired, I wasn’t alone all the time. I was able to draw on support whenever I needed it. […] They basically just looked after her minute by minute for those final two nights.  It was incredible.”

“Even in the early stages, it was clear that they were there to support me as well as Svitlana.  I had a lot of conversations with the nurses. I had some psychological counselling. I even had an aromatherapy session at home. It was very much as if we were being cared for as a couple. […] That kind of support, at that time, was absolutely vital. I was really grateful for it.”

“I had never heard of this concept before, of actually bringing the services of a hospice into the home of somebody in their latter stages. […] I had absolutely no idea of all these outreach services with counselling and all the things that staff do in patients’ and carers’ homes. Keith, the Chaplain, came around a couple of times and he also led Svitlana’s funeral which was wonderful.  I had no idea about all this support that sits alongside the Hospice at Home service.”

Michael chose to tell his story as part of the Help Us Be There campaign, in the hope that more nights of Hospice at Home care can be funded for those that need it such a crucial time:

“It is really hard to lose somebody who is so close to you.  Just knowing that they were cared for as well as they could be, and more, gives me a little bit of peace and I am grateful for that.”

The Hospice is aiming to raise £100,000, which will fund an additional 200 nights of care. To find out how you can support Arthur Rank Hospice’s Hospice at Home service and ‘Help Us Be There’ visit https://www.arhc.org.uk/helpusbethereby.asp. To see the video, read Michael’s full story or discover more about the incredible team behind Arthur Rank’s Hospice at Home service, visit: https://www.arhc.org.uk/helpusbethere.asp