'Crushing’ victory for Sophie at the V&A awards 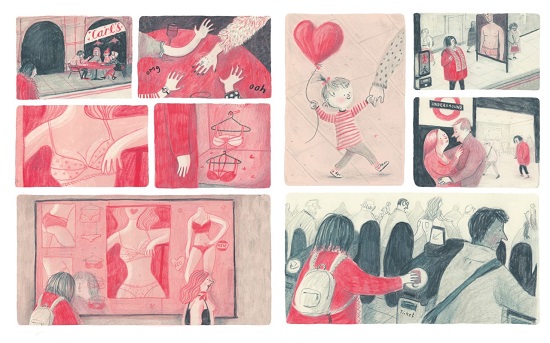 Anglia Ruskin University’s Sophie Burrows has won the V&A Student Illustrator of the Year Award for her artwork titled “Crushing”.

Sophie, who will graduate from Anglia Ruskin in October, received the prestigious award and a cheque for £3,000 at a ceremony at the world-famous design museum in London.

Her success means that the award has gone to students from Anglia Ruskin’s Children’s Book Illustration Master’s course for each of the last four years, with 29-year-old Sophie following in the footsteps of Joseph Namara Hollis (2018), Beatriz Lostale Seijo (2017) and Kate Milner (2016).

Shelley Jackson, Course Leader for Children’s Book Illustration at Anglia Ruskin, said: “We are all tremendously proud of Sophie. She has incredible drive and creativity, and we know we’ll be seeing a lot more from her soon!”

The student category was judged this year by Suzanne Dean, Creative Director at Vintage, Penguin Random House and V&A Book Cover Winner in 2018, and Cat O’Neil, Illustrator and V&A Editorial Winner in 2018.  The judges said of Sophie’s work: “Burrows tender illustrations in graphic novel format are both darkly amusing and wryly observed.

“Her shrewd use of just two colours conjures a quirky dreamlike atmosphere as well as evoking the essential loneliness of the central character.”

Fellow Anglia Ruskin student Junli Song was highly commended for her work “Dance”.  The artwork from the student shortlist, as well as the winners of the three other awards, is on display in Gallery 88a at the V&A until Sunday, 25 August.

Hunt, Director of the V&A, said: “The V&A’s mission has always been to promote creativity, ingenuity and imagination. The V&A Illustration Awards perfectly encapsulate our founding purpose, celebrating some of today’s most talented artists and helping to inspire future generations. We are delighted to welcome such an exciting range of skilful works into our galleries as we celebrate this year’s award winners.”

Meanwhile, Children’s Book Illustration MA graduates make up four of the six illustrators announced on the shortlist for this year’s £5,000 Klaus Flugge Prize.

Sam Boughton (The Extraordinary Gardner), Eve Coy (Looking After Daddy), Emily Haworth-Booth (The King Who Banned the Dark) and Fifi Kuo (I Can Fly) feature on the all-woman shortlist. The winner will be announced at a ceremony in London on 11 September.