Bronze bust marks 100 years of Save the Children 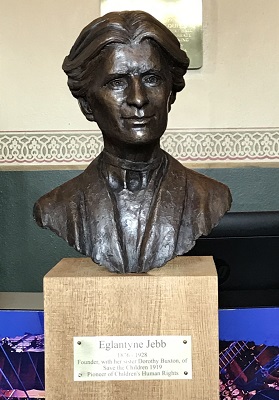 A bronze bust of Save the Children founder Eglantyne Jebb produced by Anglia Ruskin University Fine Art graduate Ian Wolter has been unveiled at the Royal Albert Hall in London, where the charity was founded 100 years ago this week.

The commission for the bust, which will live permanently at Save the Children’s London HQ in Farringdon, came following the publication of an award-winning biography about Jebb, The Woman Who Saved the Children, written by Ian’s wife Clare Mulley.

A courageous humanitarian, in 1913 Jebb had distributed aid in the Balkans on the eve of the First World War.  After the armistice, she won the support of factory girls and the aristocracy, the Pope in the Vatican and even the Bolshevik government.

In 1919 Jebb was arrested in Trafalgar Square for distributing humanitarian leaflets – few in London were sympathetic to a woman hoping to help the children of Britain’s former enemies – and she ended up in court.

Undeterred, Jebb and her sister, Dorothy Buxton, organised a public meeting at the Royal Albert Hall on 19 May, 1919.  “Surely it is impossible for us, as normal human beings, to watch children starve to death, without making an effort to save them?” she told the crowd.  A spontaneous collection was taken up around the hall, and Save the Children’s life-saving work had begun.

Before she died in 1928, Save the Children was an international movement and her concept of children’s rights had been adopted by the League of Nations. Jebb’s legacy continues to save the lives and improve the life-chances of millions of children in Britain and around the world.

Wolter (pictured right), who graduated from the BA (Hons) Fine Art course at Anglia Ruskin University in 2015 and has gone on to win the Venice Arte Laguna Prize in 2016 and the Rome RomArt Sculpture Prize in 2017, said: “I was delighted to receive this commission as my wife, Clare Mulley wrote the biography of Eglantyne Jebb, so I felt I already knew her and it’s great to play a part in ensuring that she’s properly remembered.

“It’s inherently difficult to create a portrait of someone who was born in the 19th century simply because there are so few photographs. For this project I approached my local paper who created an appeal for models who looked like Jebb.  I received nine responses, two of which looked very like her.  So I created two portraits from life before choosing one to turn into the bust.  This, I hope, has ensured that the finished sculpture is ‘alive’.”

Kevin Watkins, CEO of Save the Children, said: “A fitting tribute to Save the Children’s remarkable founder Eglantyne Jebb – a pioneering woman who dedicated her life to children’s welfare and human rights, and permanently changed the way the world acts towards children.

“We’re incredibly excited and humbled to have the award-winning sculptor Ian Wolter create the bust for us and to be able to house this wonderful piece of artwork in our London office.”