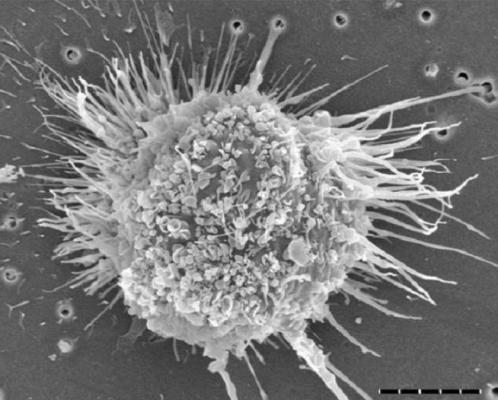 New therapies have been discovered to help the body shrink cancer tumours.

A study funded by UK Research and Innovation’s (UKRI) Medical Research Council (MRC) and the Royal Society has found that cancer therapies that use immune cells to trigger the body to attack tumours could be improved by a molecule that boosts their function.

The studies on mice found that the improved therapies produced a powerful anti-cancer immune response, which led to tumours shrinking.

Initial experiments show the molecule has similar effects on human cells and could boost the success of cancer therapies for people.

The LL-37 molecule is produced naturally by the body in response to infections and helps to kill harmful bacteria and viruses.

Scientists at the University of Edinburgh found it also influences immune cells and boosts their function. In particular, the molecule boosts the function of specific cells that are responsible for initiating targeted immune responses – called dendritic cells. Dendritic cells have been used as cancer therapies because they can trigger other immune cells to recognise and attack tumours.

This approach typically involves taking a sample of the patients’ own cells and growing them in the lab under special conditions before infusing them back into the patient.

The process is expensive and has been hampered by difficulties with preparing sufficient numbers of dendritic cells that have the right characteristics for use as therapies.

Researchers at the university’s Centre for Inflammation Research found that adding LL-37 to dendritic cells while they are growing in the lab boosts yields of cells suitable for clinical use. Treating mice with cells grown in this way helped to shrink tumours and, in some cases, led to complete clearance of the cancer.

Dr Emily Gwyer Findlay, of the University of Edinburgh’s Centre for Inflammation Research, said: “Our research has previously focused on the potential LL-37 has for fighting infections, but excitingly we now find that this substance, which the body makes naturally, could be used in new cancer treatments too.

“We hope that our discovery will create new opportunities by overcoming some of the current road-blocks to effective use of dendritic cell-based cancer therapies.”

The study was published in the journal Oncoimmunology.

Image: A dendritic cell. Image courtesy of the University of Edinburgh​