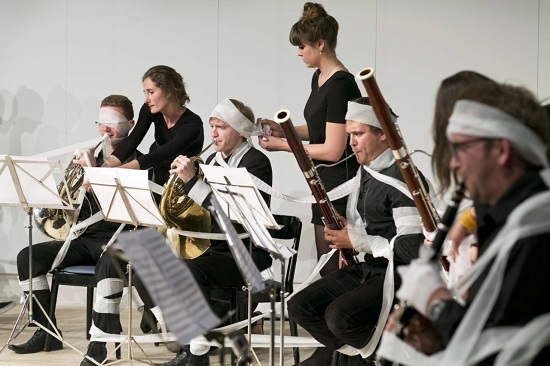 Students from Anglia Ruskin University and the University of Cambridge will perform Yoko Ono’s unforgettable Sky Piece to Jesus Christ in Cambridge on Saturday (15 June  at 6pm).

Directed by Gabriella Daris and conducted by Dr Paul Rhys, eight musicians will perform Vivaldi’s exuberant Concerto in D Major RV 781, while another group of performers gradually and gently intervene in such a way as to silence their playing.  Sky Piece to Jesus Christ was first performed in New York in 1965, with La Monte Young conducting a group of Fluxus musicians.

Dr Rhys, Senior Lecturer in Music at ARU, said: “Yoko Ono draws inspiration from the example of John Cage in creating a work that reaches for the beauty of silence and cheerfully disregards musical tradition.  It promises to be an unusual and thought-provoking evening.”

Sky Piece to Jesus Christ, which will be staged at Downing College’s Howard Theatre, is one of the free public events for the exhibition YOKO ONO: SKY PIECES, curated by Gabriella Daris and on show at The Heong Gallery, Downing College, until 8 October.

YOKO ONO: SKY PIECES reflects Ono’s fascination with the sky, which stemmed from her exile from Tokyo during the World War II bombing raids, and is part of YOKO ONO: LOOKING FOR… which is showcasing Ono’s work in Cambridge for the first time.

YOKO ONO: LOOKING FOR… will feature a diverse programme interventions, installations, performances, screenings and symposia, at venues including Lady Mitchell Hall, The Heong Gallery, Howard Theatre, Alison Richard Building, the Ruskin Gallery and Mumford Theatre at ARU, and Cambridge Junction, as well as many public sites in the city.

The event on Saturday, 15 June is free to attend and the performance will be followed by a discussion and Q&A with Dr Paul Rhys of ARU, and art historian and critic Gabriella Daris, curator of the exhibition YOKO ONO: LOOKING FOR… moderated by Dr Ross Cole, Research Fellow in Music at the University of Cambridge.  To reserve a place, please email gallery@dow.cam.ac.uk