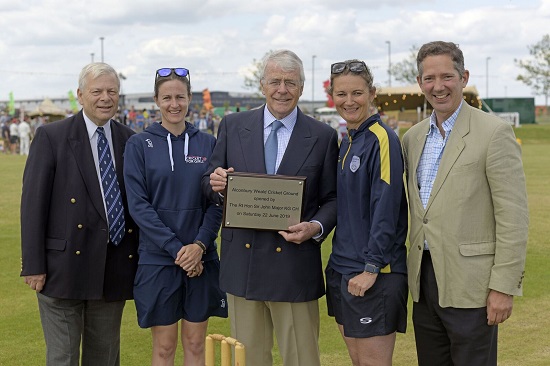 Visitors were entertained throughout the day by the first cricket match ever to be played on Alconbury Weald’s new pitch; coaching sessions, baking masterclasses, face painting and live music.

The match itself was organised by Cricket East and played out by local players who had expressed an interest in finding a new cricket club.
And to help inspire the future generation of Huntingdonshire cricket stars, Charlotte and Lydia held a super-skills coaching session for boys and girls, giving them a taste of the game.

The Big Summer Bash was created by Urban&Civic, the master developer of Alconbury Weald, as a celebration to mark a key milestone in the development of the growing community.

Sir John Major said: “Having lived in the area for many years, I am delighted to see what Urban&Civic has achieved, here at Alconbury Weald, to encourage sports participation and active and healthy lifestyles. It gave me great personal pleasure to “open” the new pitch, which will be used by many generations to come. Hopefully, before long, we will uncover our next Charlotte Edwards.”

Former England women’s cricket captain, Charlotte Edwards CBE, said: “Having grown up in Huntingdonshire there is no better sight than to see a new cricket pitch, with new players all getting involved and wanting to play cricket. This is a fantastic new facility for the community and hopefully a catalyst to get more people excited about the game.”

Tim Leathes, Development Director at Urban&Civic, said: “The Big Summer Bash has been a fantastic way to celebrate a major milestone at Alconbury Weald with the public. We are passionate about wellbeing and sports and believe it is a crucial part of what makes a new development successful. We look forward to establishing a full time cricket team here next season.”