GCP to draw up plans to transform public transport 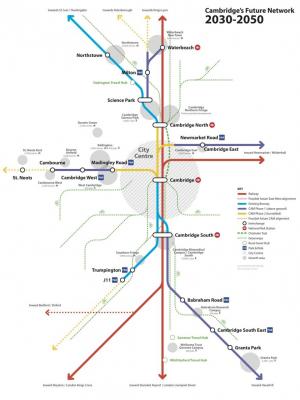 The Executive Board instructed officers at a meeting yesterday (Thursday) to draw up plans to be considered later this year.

More than 5,000 people responded to the GCP’s Choices for Better Journeys campaign, with 82% supporting the GCP’s vision to transform public transport and 81% choosing a traffic-reducing measure as their first choice for slashing congestion and funding better public transport services.

The GCP will now draw up plans to transform how buses serve Cambridge and the surrounding villages – and how to reduce congestion to ensure these services can run smoothly and efficiently to give people the reliable service they deserve.

Members also made a commitment to explore improvements to existing transport infrastructure and look at travel planning and residents parking schemes as part of that work.

This autumn the GCP will hold a 'Citizens’ Assembly', where dozens of people from a broad spectrum of the community – supported by an expert advisory panel – will scrutinise the evidence and make recommendations for the GCP Board to consider later this year.

“There is an urgency for us to take action to improve public transport, reduce congestion and improve the quality of the air we breathe for everyone who lives and travels around Greater Cambridge.

“The findings to the Choices for Better Journeys campaign show that people share our appetite for reducing traffic and substantially improving our public transport network so people have better options to using their cars, particularly at peak time.

“We need to double the capacity of our public transport network - particularly bus services - and upgrade walking and cycling routes to help people get around quickly and more reliably.

“I look forward to reviewing the detailed package of measures officers draw up and also to listen to the recommendations that come from the Citizens’ Assembly in the autumn.”

Members agreed the principles by which the plans will be drawn up, which include:

1.    Tackling air pollution and congestion now and in the future, supporting a reduction in carbon emissions locally.

2.    Encouraging behaviour change so people make more journeys on public transport, or by cycling or walking to reduce car journeys.

3.    Significantly improving access for people travelling into and around Greater Cambridge.

4.    Plans should be fair and equitable to both people travelling to Greater Cambridge from further away, as well as to those residing in Cambridge and South Cambridgeshire.

The Board also approved plans for a new travel hub to the west of M11 junction 11, after a public consultation found 71 per cent of respondents backed proposals for a new dedicated site rather than building a multi-storey car park at the current Trumpington Park & Ride site.

The new travel hub aims to intercept thousands of people who drive into the city from the M11 and will encourage more people to complete the ‘last mile’ into Cambridge or the Cambridge Biomedical Campus on foot, bicycle or public transport. The scheme will now enter the planning application process.

Members agreed to hold a public consultation on the possible routes for phase two of the Cambridge South East Transport Scheme – which would provide reliable public transport along the key A1307 route into the city – in the autumn.

The Board agreed in October to adopt the off-road strategy which could transition into the Cambridge Autonomous Metro being developed by the Combined Authority.

The GCP has been delivering safety improvements, bus priority and upgraded walking and cycling links along the A1307 as part of £14m package of ‘quick wins’ identified for phase one of the scheme.

Members also reiterated the importance of the delivery of Cambridge South Station for the delivery of the GCP’s transport vision and agreed to work with partners to develop plans to enhance the rail network.

For more information about the GCP’s projects visit www.greatercambridge.org.uk.

To watch a stream of the Executive Board meeting in full visit our YouTube channel or Facebook page.