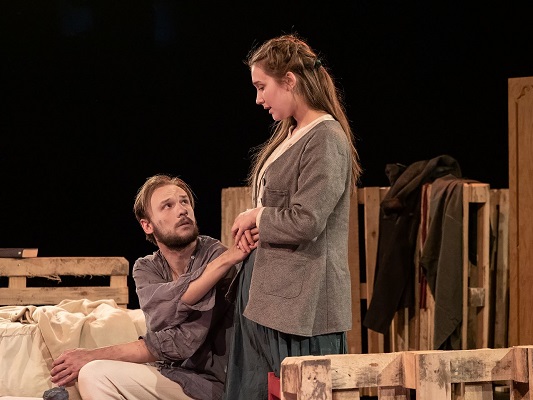 The UK premiere of Bliss, the new work from acclaimed playwright and Anglia Ruskin University (ARU) Royal Literary Fund Fellow Fraser Grace, will be staged in Cambridge on Friday, 19 July and Sunday, 21 July.

Produced by the Menagerie theatre company, Bliss is an adaptation of The River Potudan by Andrey Platonov, one of the Soviet Union’s great writers whose work was supressed under Stalin’s rule.

The play received a stunning reception at its world premiere last month at a festival in the Russian city of Voronezh. The UK premiere, at the Junction in Cambridge, is part of the Hotbed Festival 2019.

Bliss is set in post-civil war 1920s and is a tragi-comic tale centred around a Soviet soldier, Nikita, returning to his home village, meeting his childhood friend Luba and trying to rebuild his life from scratch.

On adapting Platonov’s work, Grace said: “In my mind, Platonov completes the great trinity of Russian literature of the first half of the 20th century. In the beginning, undoubtedly, is Chekhov. Anton Chekhov foresees a great upheaval but, dying over a decade before the Revolution, he can talk of this change only in images – the unstoppable felling of trees in The Cherry Orchard.

“After Chekhov, there’s Maxim Gorky. In Gorky’s plays, the conflict between classes explodes in violence. And finally comes Platonov.  Not for him the great public stage of the Moscow Arts Theatre; there was no feting of Platonov in his lifetime and much of his work is unfinished.

“The constants of Platonov’s writing life were the private notebook, the publishing contract never honoured, and the hovering threat of the censor’s pen. Platonov saw the self-interest of those wielding power and the continued suffering of those the revolution was intended to serve. About these things Platonov had to be subtle, but could never be silent – and so he remained, for so many years, largely silenced.”

Grace, whose play Breakfast with Mugabe premiered at the RSC in Stratford and more recent work Kalashnikov: In the Woods by the Lake is being adapted as a feature film, added: “I suppose adapting a short story by one of the great Soviet writers and then staging the world premiere in Russia could be seen as ‘taking coals to Newcastle’ but thankfully it was very well received, and it is wonderful to be bringing the UK premiere to Cambridge.”

The Hotbed Festival website has further information about Bliss, and links to book tickets for the play and a special playwriting workshop led by Grace.